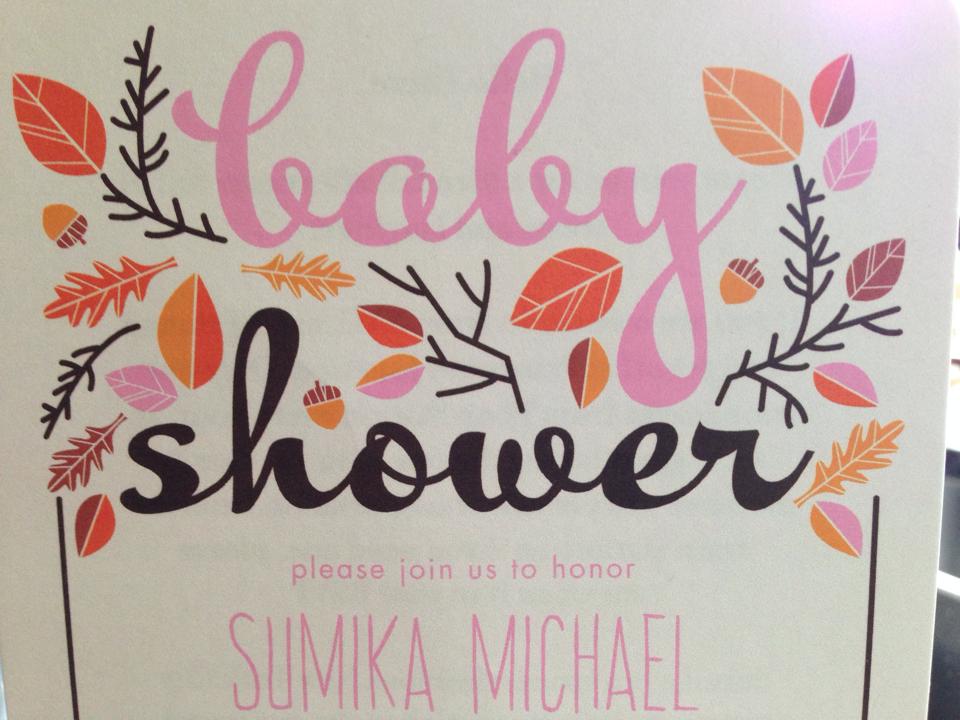 Last October, my mom and I threw a baby shower for my cousin Sumika.  The theme was simply the fall, so we decorated with pumpkins (see the centerpiece on the table) and leaves, and of course baby pink balloons too, and tried to incorporate traditional fall flavors into the menu.  Having just returned from the UK at that point, I felt very inspired to create an afternoon-tea style menu. 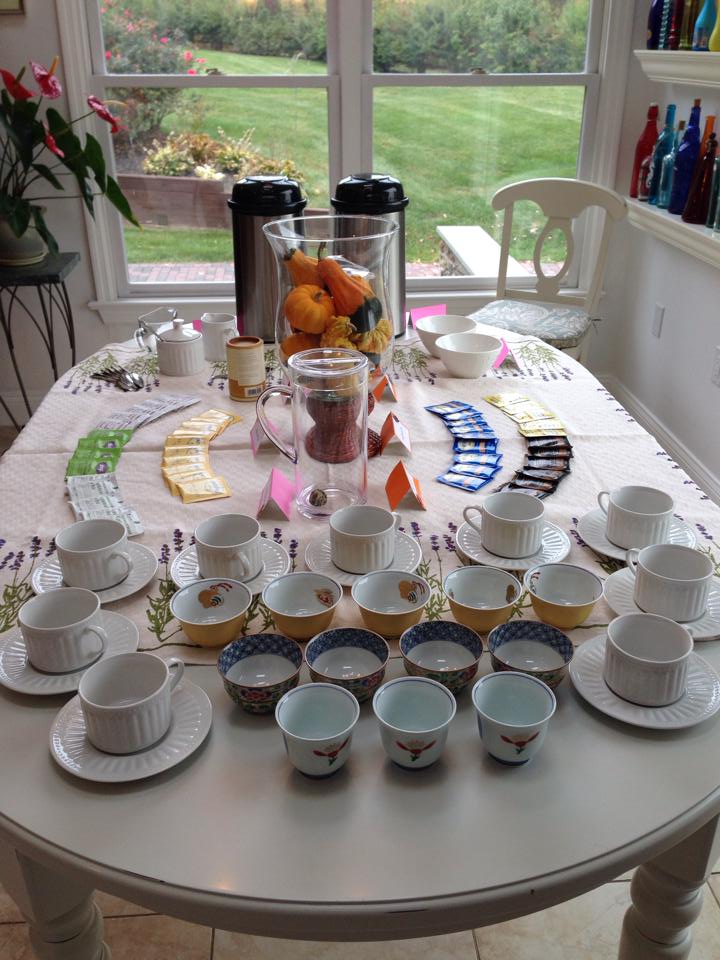 The interesting thing about my family, however, is that we are a unique combination of East-meets-West.  My mom’s family is Korean, but there are many Japanese influences in our family as well.  For instance, my mom grew up in Tokyo (where I was born), Sumika is partly Japanese herself and grew up there, and everyone speaks Japanese (well, Christine and I learned, but we are nowhere near fluent).  As such, my mom and I decided to not only employ a fall theme for the shower but to also incorporate an East-meets-West theme, as Sumika’s future baby herself would be half Asian and half Caucasian (like me and Christine!).

You can see in the picture below, we set the table with both traditional Japanese tea cups as well as traditional Western cups with saucers.  We also served English Earl Grey tea alongside Jasmine tea, green tea, and Genmaicha.

As for the food, we also tried to blend together the flavors from two different styles to create a unified and interesting array. 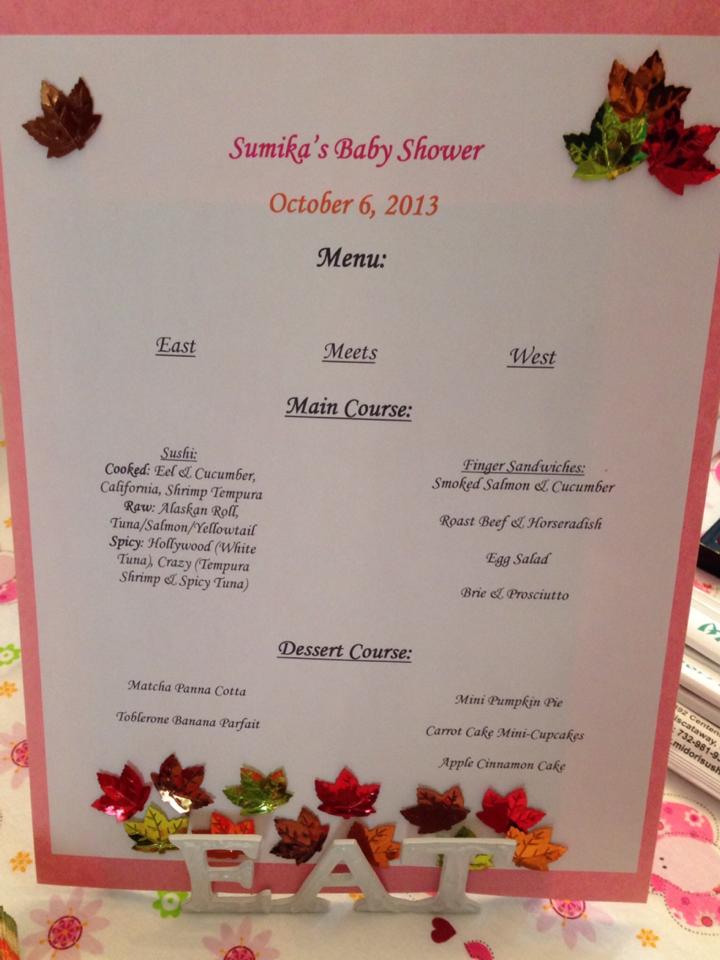 For the East entrees, we served three types of sushi: cooked, raw, and spicy.  We ordered the sushi from Midori on Rt 206 in Montgomery.  I absolutely recommend Midori.  Their fish is very high quality – always fresh and melts in your mouth.  I also especially appreciate that the chefs do not sere an overwhelming amount of rice in their sushi rolls.  Also, just look at these photos below to see how beautifully they plate their creations. 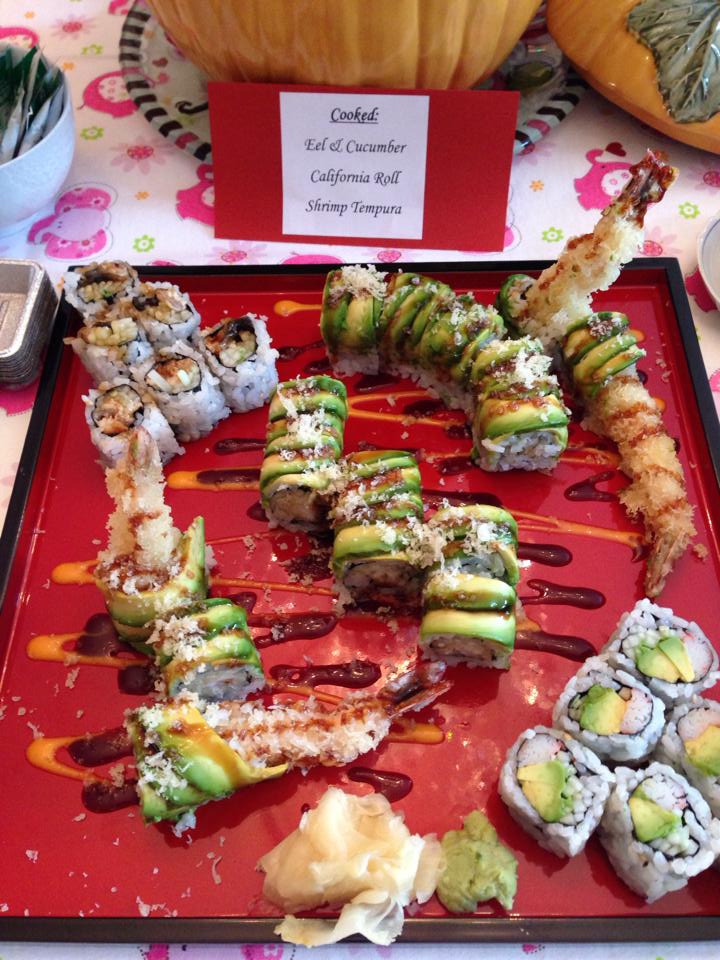 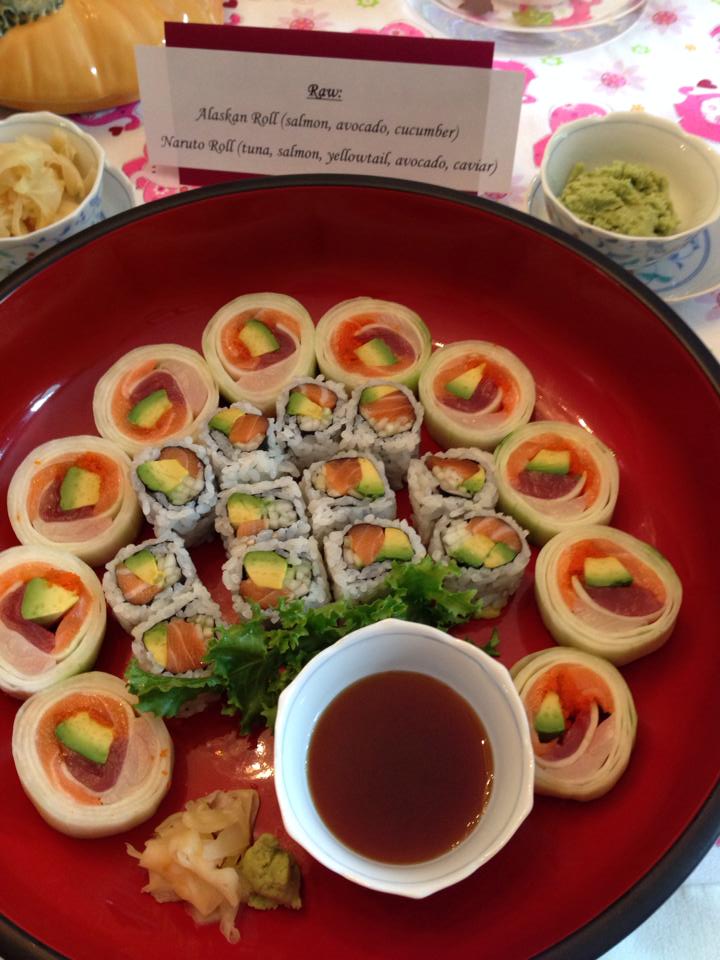 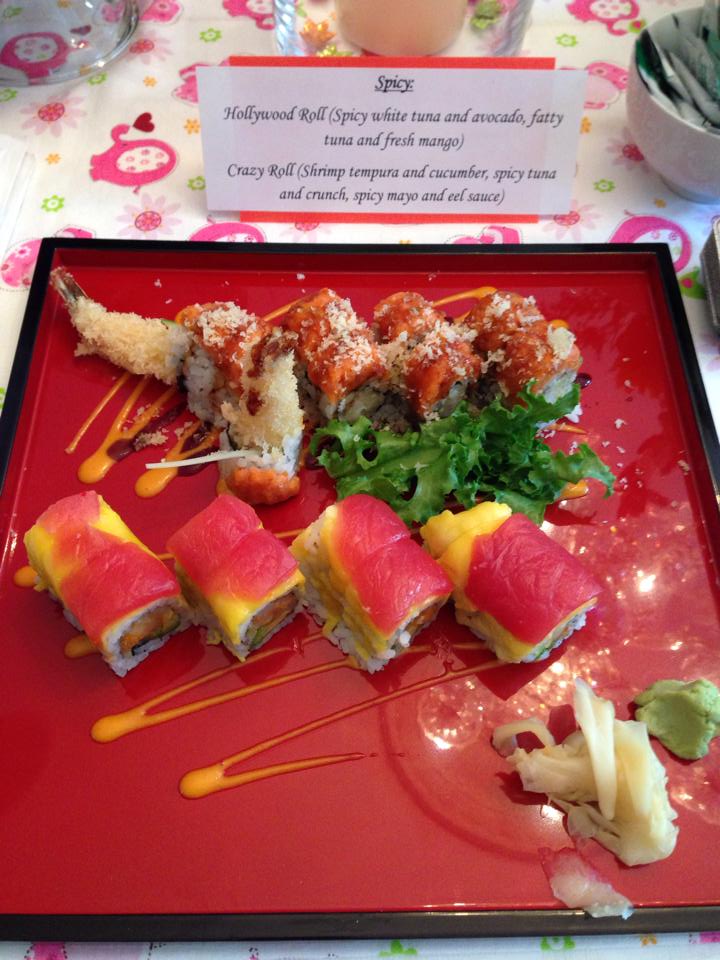 Now for the West entrees.  We served four types of finger sandwiches.  Yes, we cut the crusts off too.  They included smoked salmon and cucumber, roast beef and horseradish, egg salad, and brie and prosciutto.  Unfortunately I cannot find a picture of these lovely bites, but they were very reminiscent of my tea experiences abroad.  The brie and prosciutto was especially tasty, as we served it on a fruit and nut bread for extra flavor.

On to the desserts.  I had a few practice tries for some of these recipes before the big day to make sure everything I would be serving would actually be good.  I certainly did not want any baking surprises on the day of the event.

So for the East themed desserts, I made a matcha panna cotta topped with azuki red beans . . . 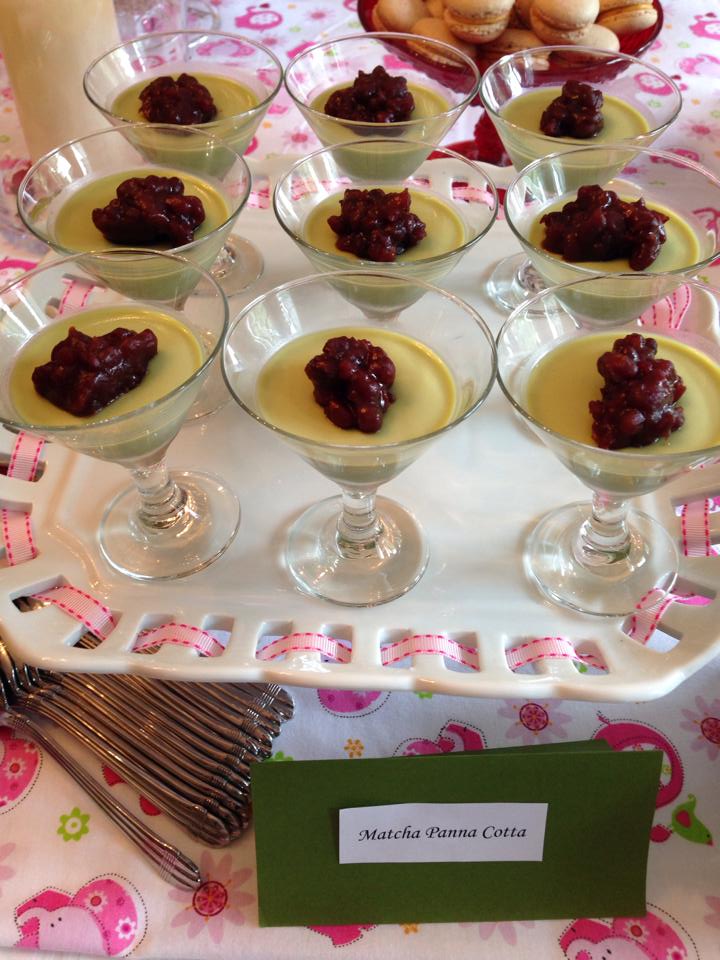 . . . and mini Toblerone mousse banana parfaits.  Yes, I know Toblerone is Swiss, but I remembered having chocolate parfaits with bananas and cornflakes at Japanese restaurants, so I relied on that memory for the connection.  The mousse (which by itself was amazing – thank you to my Swiss friend Fabienne for the recipe!) sat inside mini chocolate cups that I had made the day before, and I topped the mousse with tiny banana slices, corn flakes, and whipped cream. 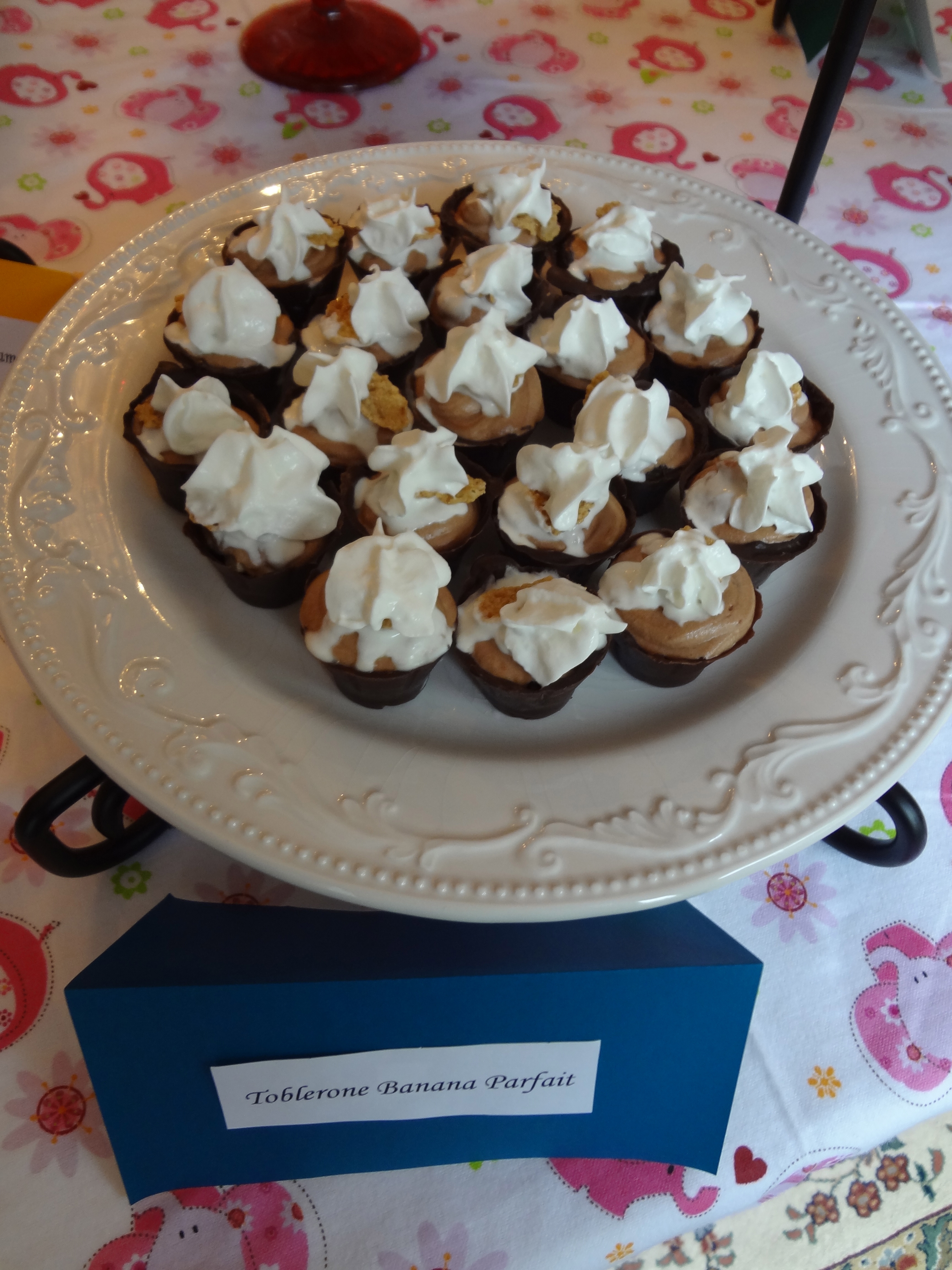 For the West desserts, the choices were simple: 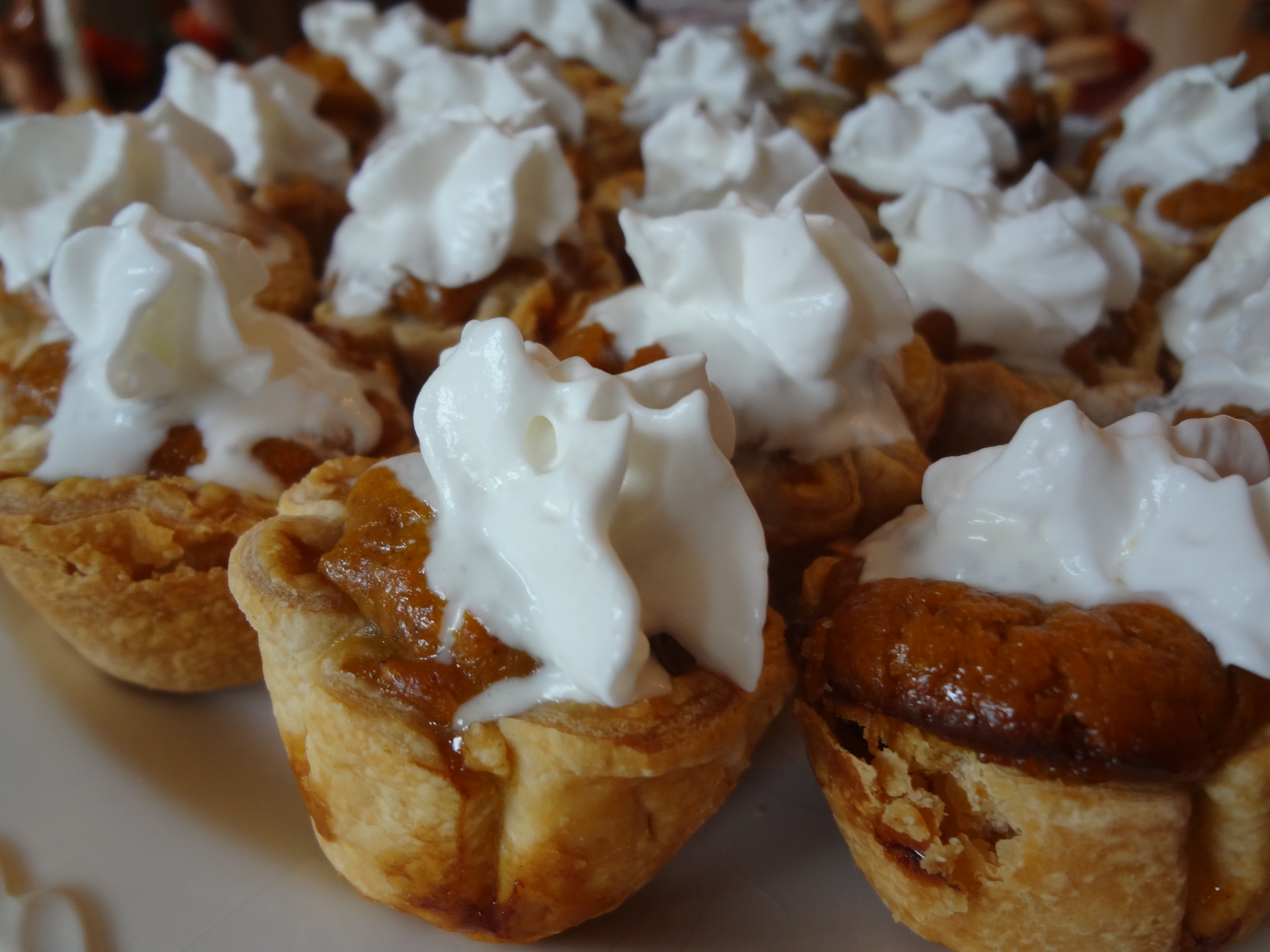 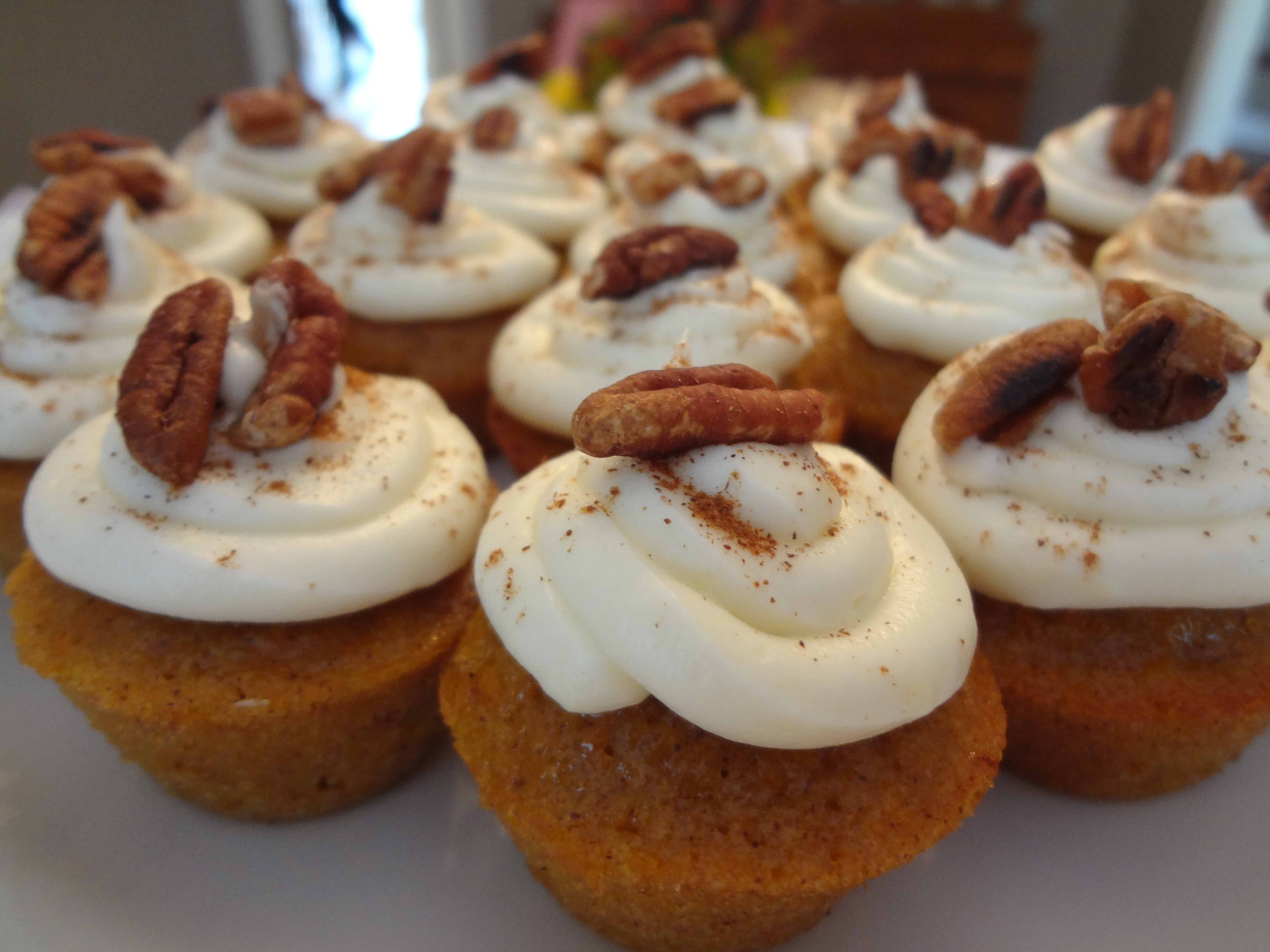 You can see some pumpkin spice macarons on the table that I made as well.  Oh look! On the right you can see the sandwiches behind the desserts on the right! 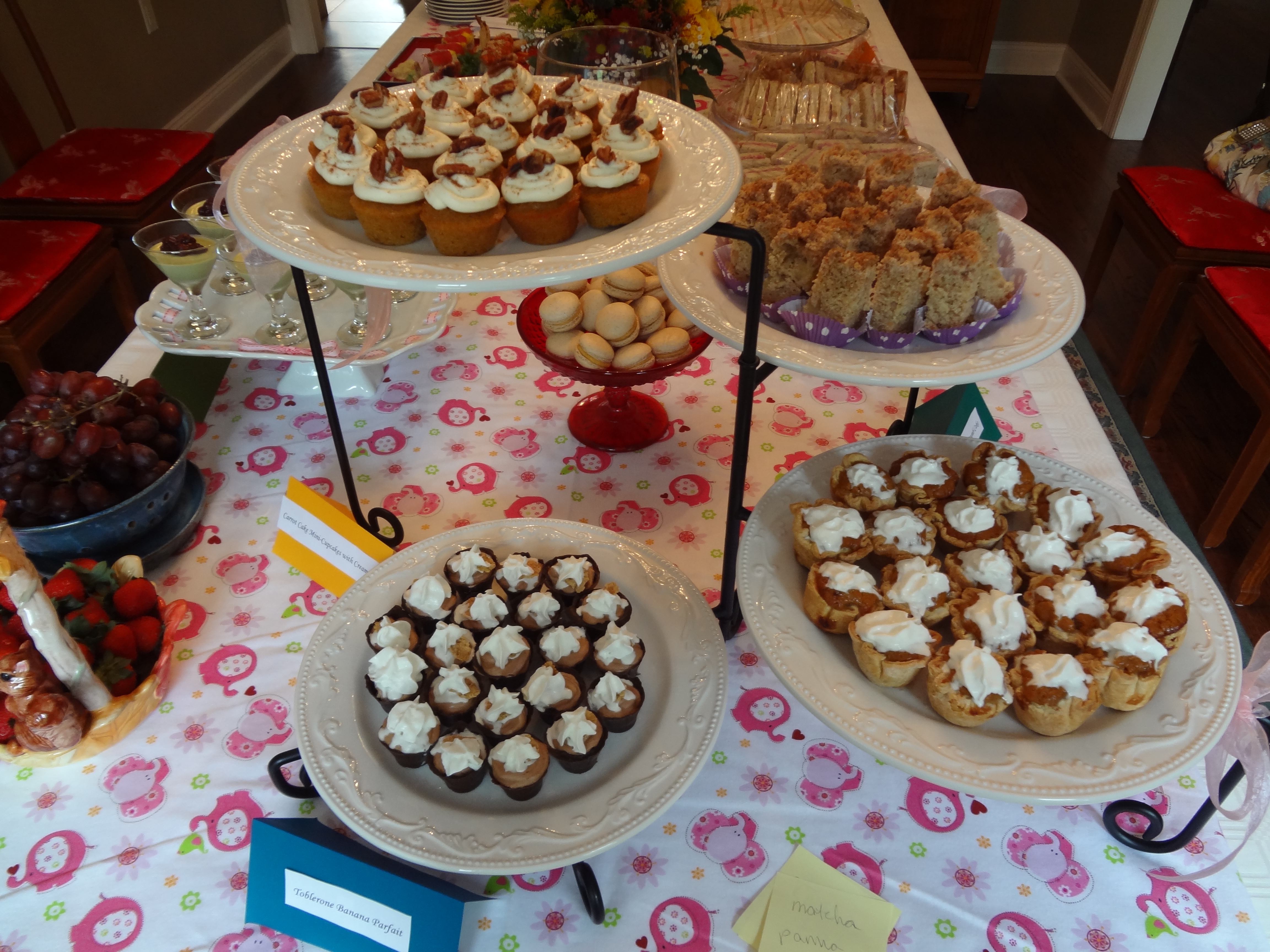 The shower was a big success.  The sushi was gone in a blink, and we had almost no sandwiches left over.  Most people took whatever desserts were remaining home with them.  I also made goodie-bags of cookies for guests to take home. 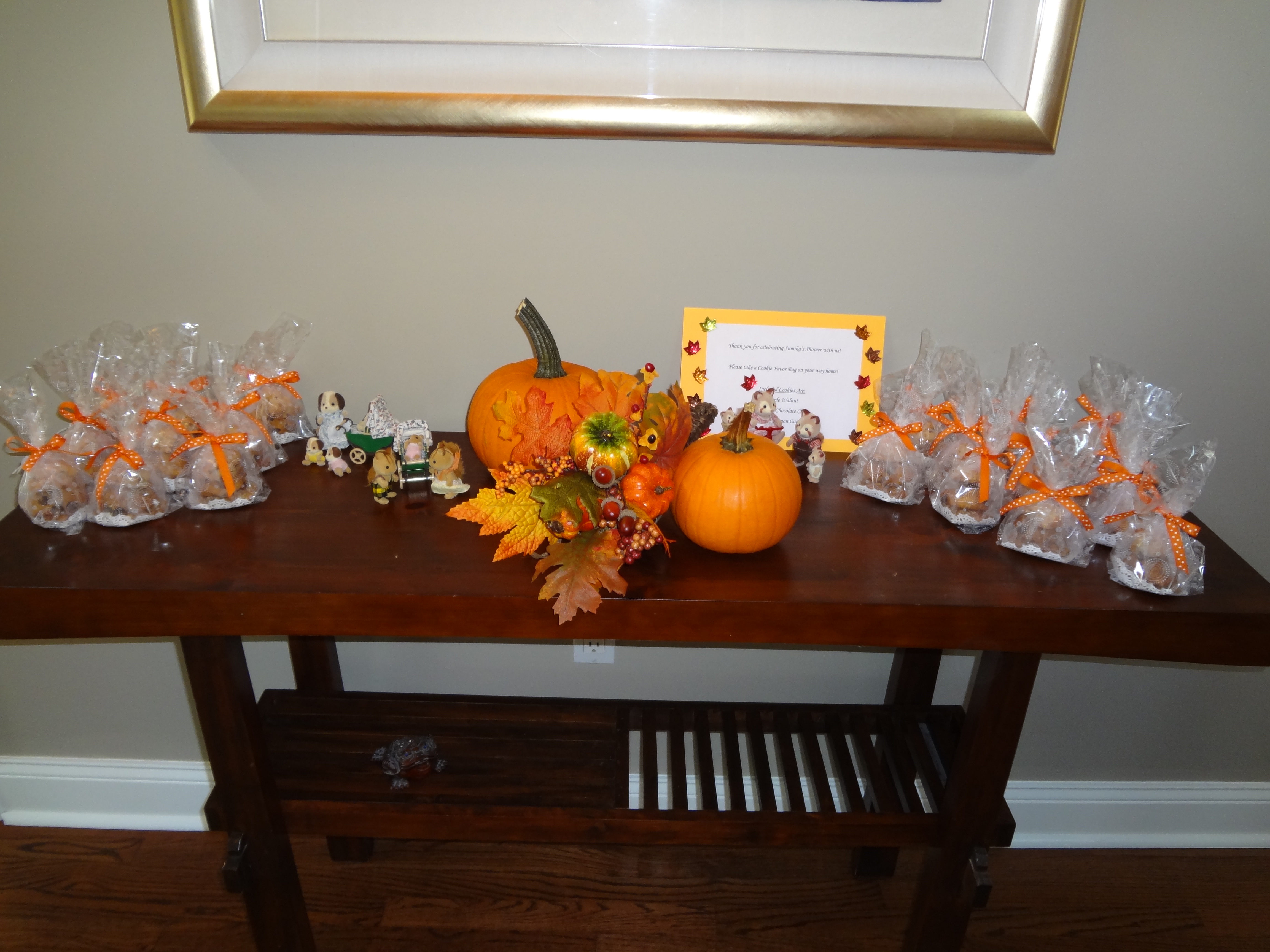 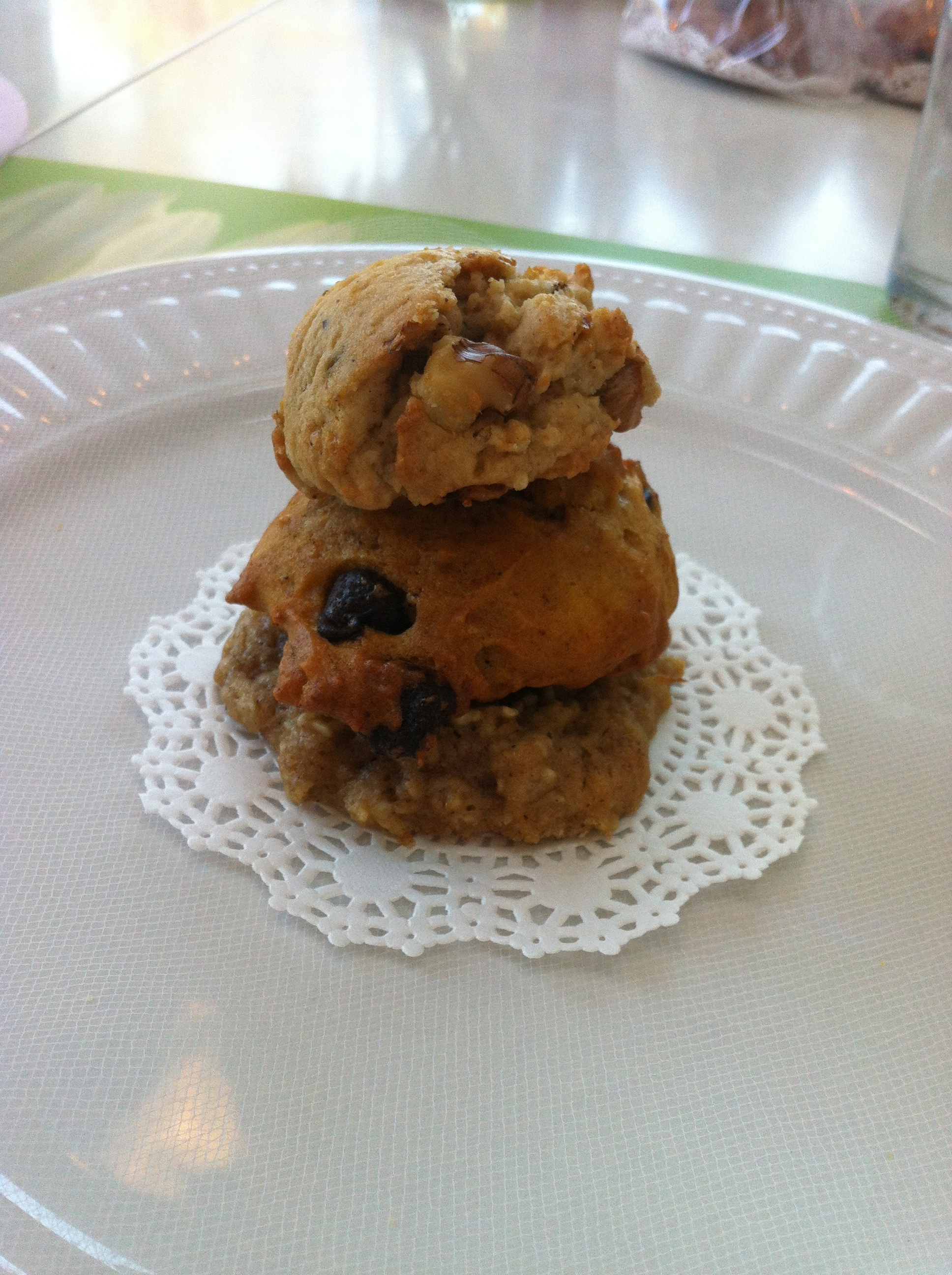 Well I hope you enjoyed the pictures as much as I loved making everything in them (except the sushi of course).  If anyone is having a party in the fall and wants some homemade desserts let me know 😉