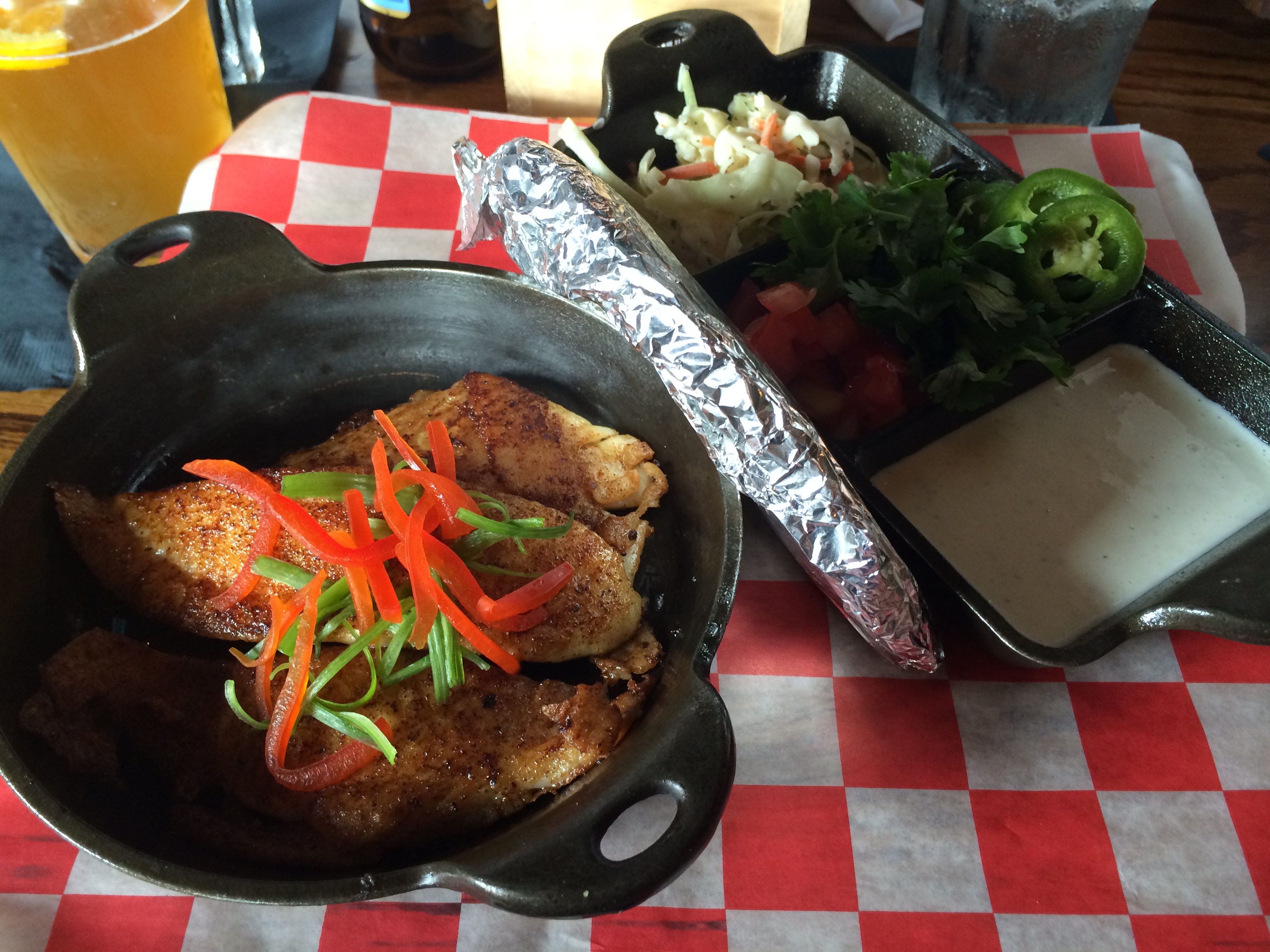 This past weekend I traveled down to Nashville for my friend Kate’s bachelorette party.  I had never been before, and I absolutely LOVED Nashville!  The city was so alive, you would find country music playing everywhere, and there was also a lot of great food.

Our first priority when we arrived was lunch.  We chose Whiskey Kitchen located in “the Gulch,” a trendy neighborhood in south west Nashville.  Here you can find a whiskey of the week and you can also try whiskey flights.  As tempted as I was, I just went for my usual Blue Moon to go with my Baja Fish Tacos.

While I have certainly had assemble-your-own-tacos in restaurants before, I had never tried fish tacos with ranch.  Surprisingly, it was very good.  It didn’t make the rest of the dish heavy and it added a nice tang to each bite.  The other fillings included cole slaw, diced tomatoes, cilantro, and pickled jalapeño peppers.  I ordered my fish blackened (you could also have grilled or fried).  I thought the fish had a great spice, a nice crispiness to it, as well as a warm softness in the middle. 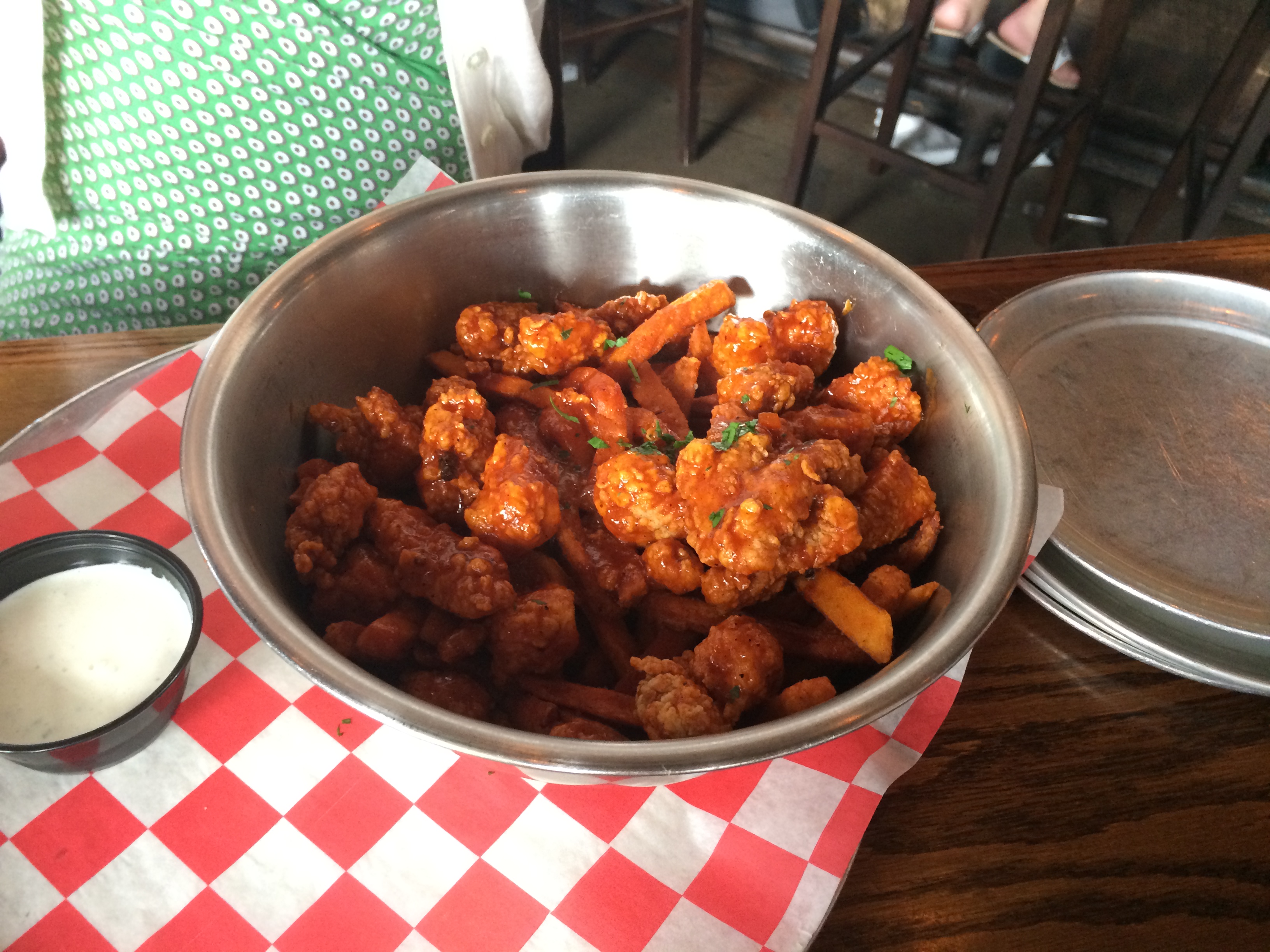 It was literally a huge bowl of chicken.  But it was delicious.  Great crunchy and sweet chicken, sweet potato fries covered in the sweet BBQ sauce – perfect to go with a beer.

So Nashville was off to a good start.  For dinner that night, we went to Cabanas.  The menu features a lot of southern staples, like catfish sliders, shrimp and grits, and even fried alligator.  We decided to try a few small plates and order a few pizzas to share amongst the six of us.

We chose the calamari to start, which was “cornmeal dusted” and served with a lime cocktail sauce. 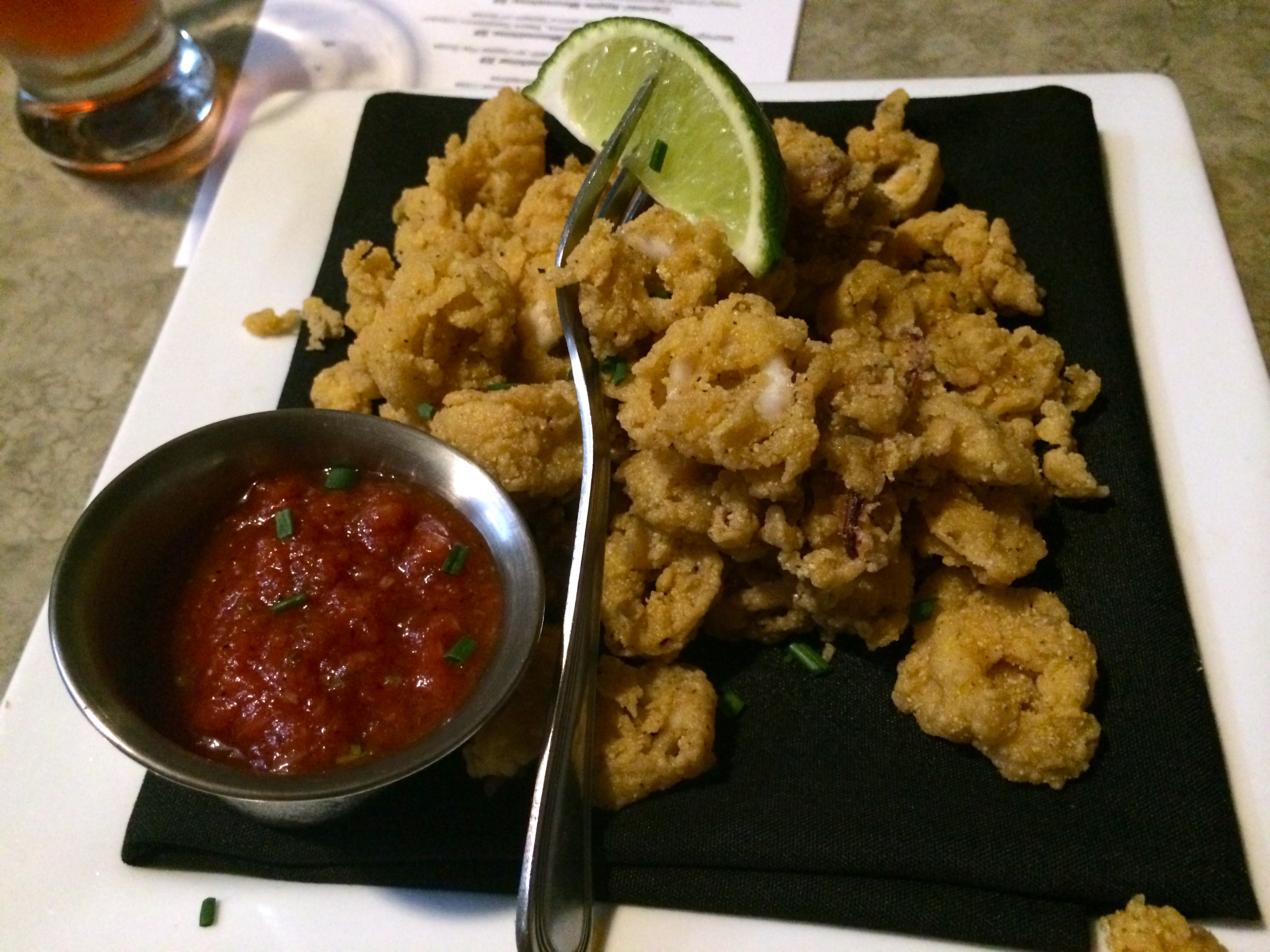 Great crunch, meaty squid, nice contrast with the dipping sauce – all in all a solid calamari dish.

We also tried the lump crab hush puppies with a spicy remoulade. 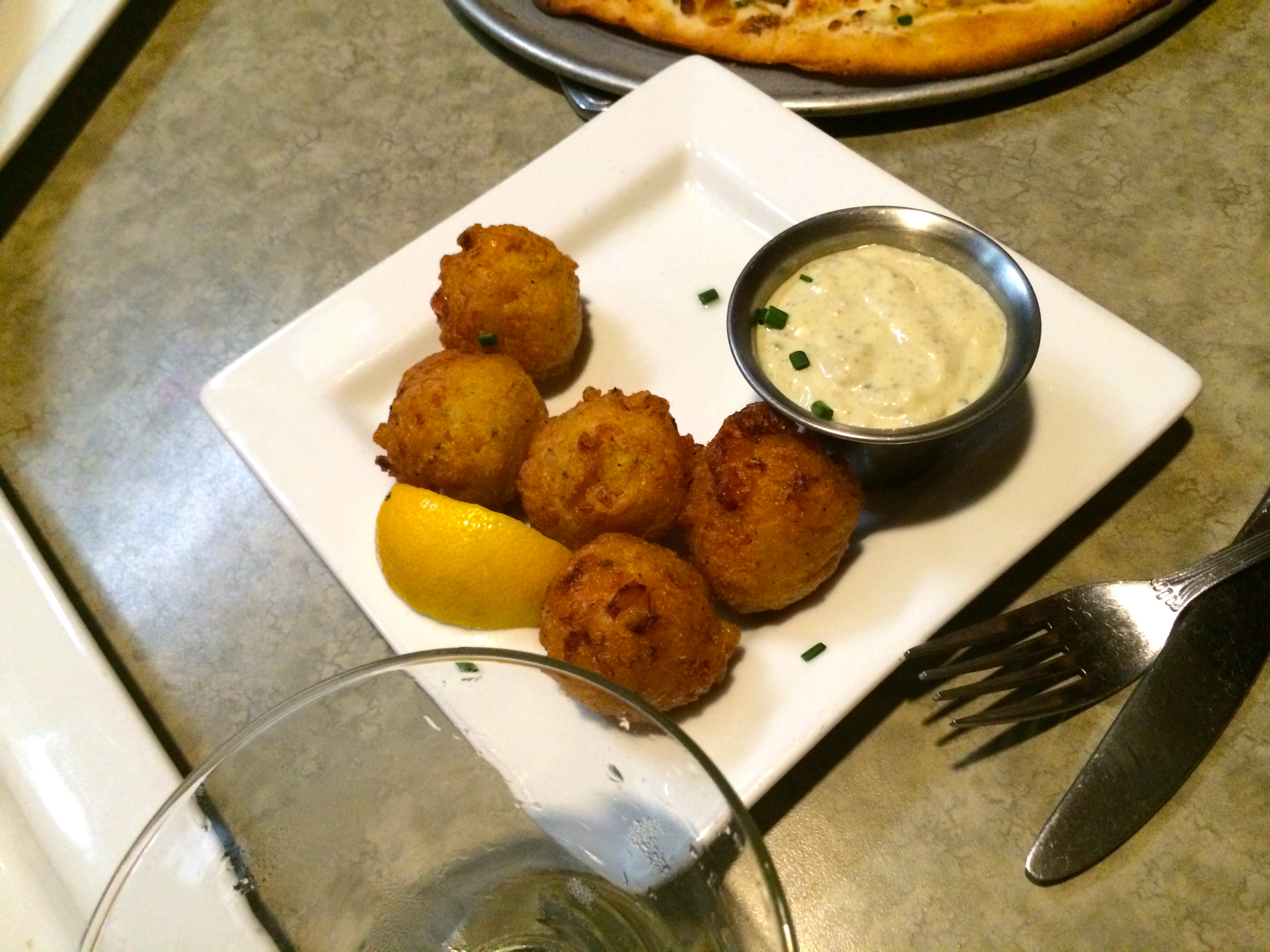 These were warm and luscious with whole kernels of corn inside (see below).  This definitely fit my idea of southern comfort food.

The two pizzas we ordered were margarita and a white pizza with ricotta cheese, roasted garlic, provolone, and herbs which we also topped with Italian sausage. 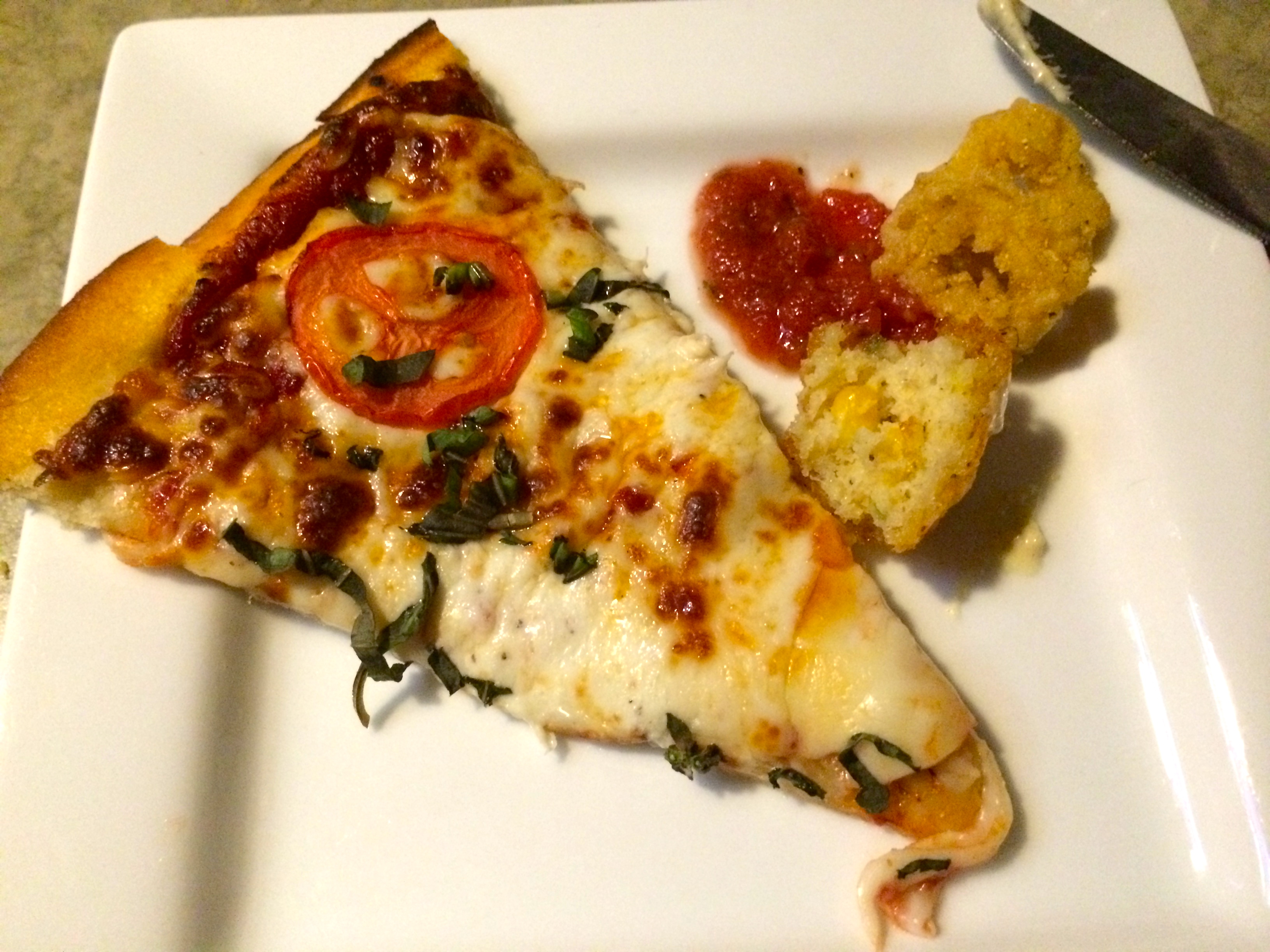 I thought both pizzas were great – once again a solid example of what I had expected when we ordered them.  The crush was strong enough to hold up the toppings (mostly a thick layer of cheese), but not too thick and filling that you could only have one slice.  Overall the dinner was very satisfying, especially with the margaritas I ordered, which were excellent.

Day 1 in Nashville had definitely been a success.