In the mood for pizza but don’t want to have a food baby?

I give you . . . the cauliflower crust pizza!

Inspired by Cassey Ho from Blogilates, I did some research on this crustless wonder to determine how I would make my own version.

First, I pulsed cauliflower florets from half of a large head of cauliflower in the food processor.  Then I microwaved the cauliflower “rice” for 8 minutes.

Next, I mixed the cauliflower “rice” with 1/2 cup of shredded mozzarella cheese, 5 Tbs. shredded Pecorino Romano, 1 tsp. dried oregano, 5 Tbs. almond meal, and one beaten egg.  I then spread this mixture onto a cookie sheet and pressed it out into a thin disk. 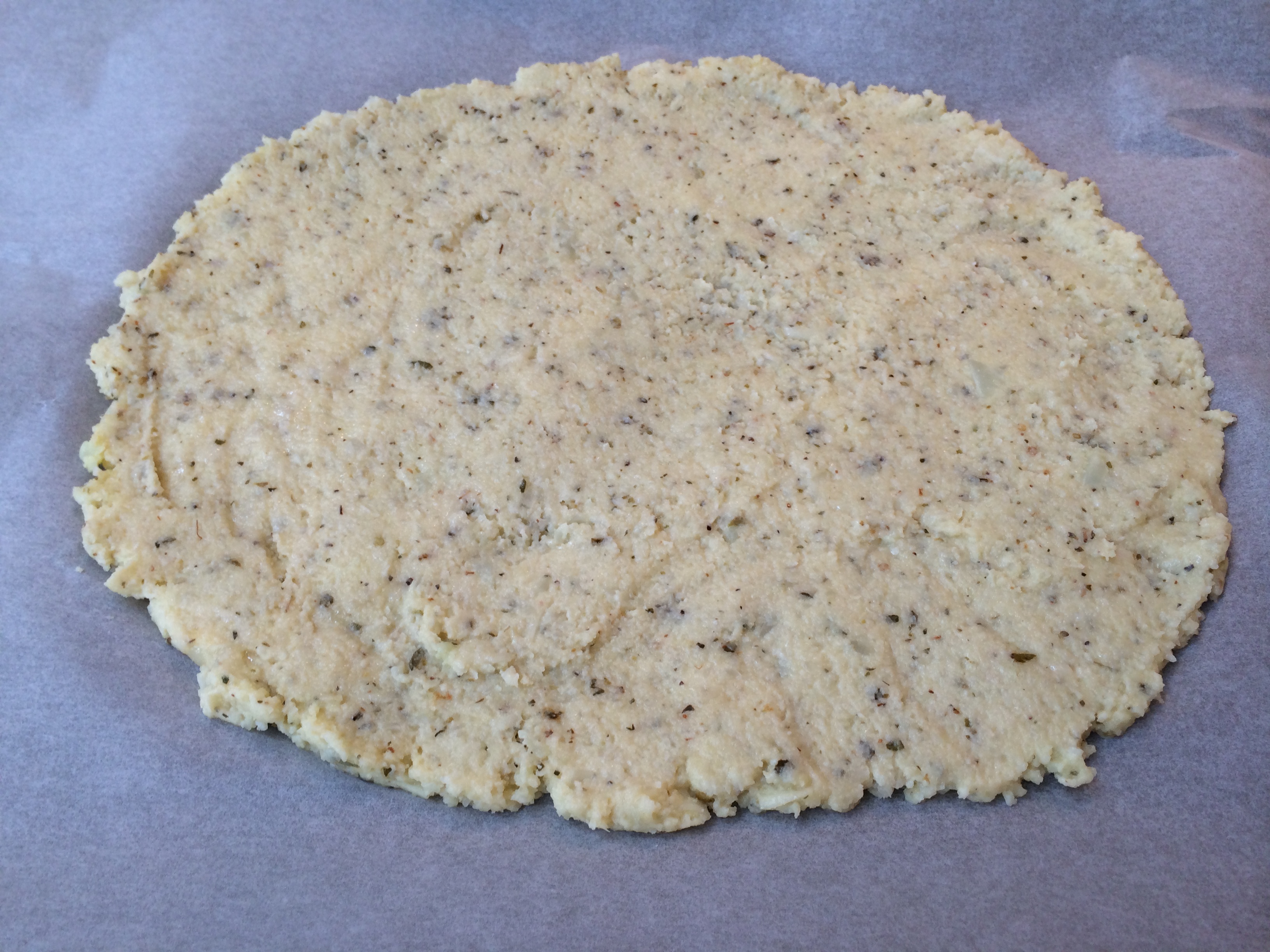 The crust went into the oven for 15 minutes at 450 degrees F.

Meanwhile, I sautéed half a green bell pepper, a few slices of red onion, and 5 Shitake mushrooms.  I suppose you could just put your toppings on raw, but personally I prefer softer veggies on my pizza.  Plus I got a nice brown on all of them, which looks great. 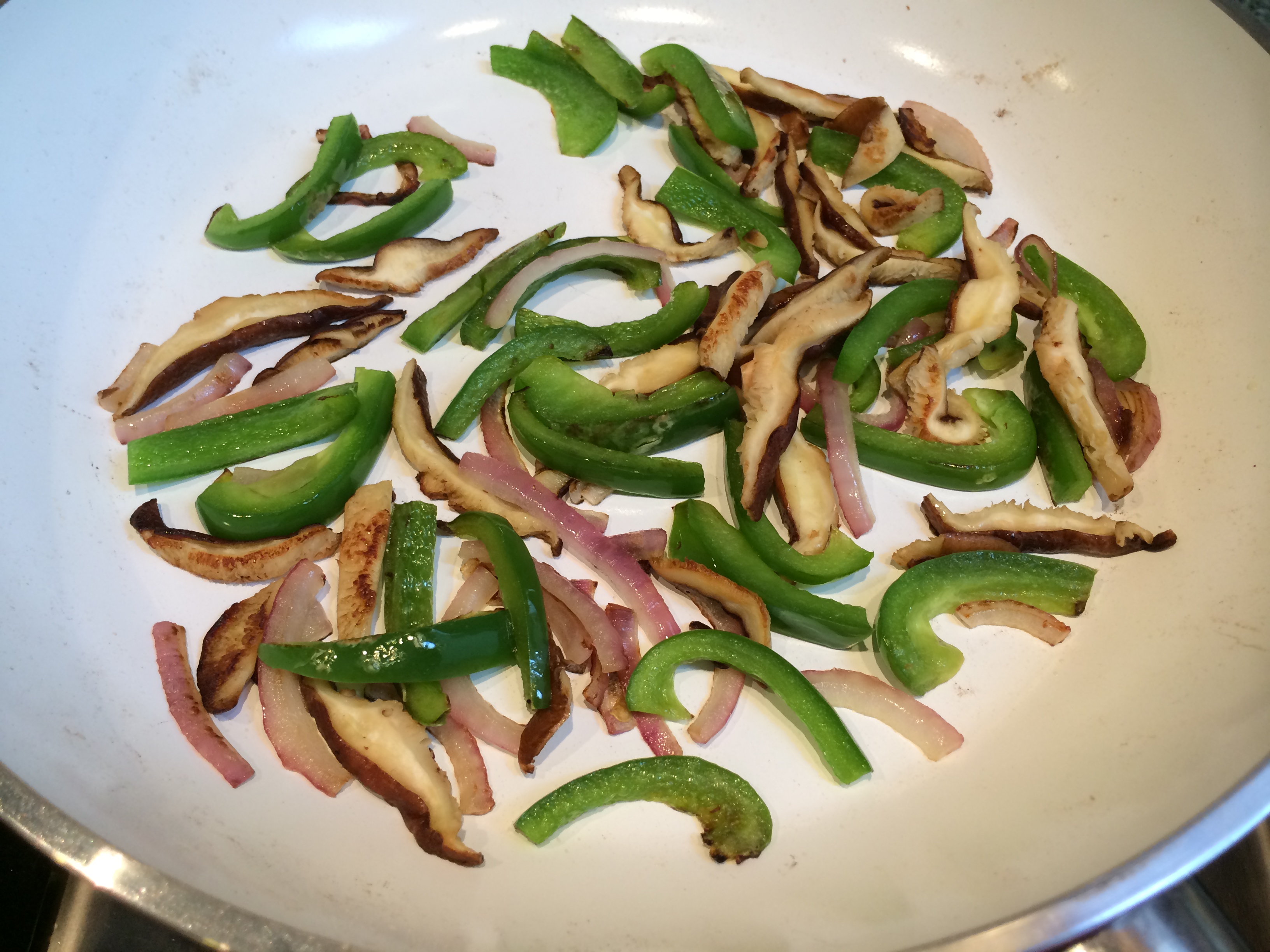 Then I prepared a simple tomato sauce made of diced tomatoes, 2 garlic cloves, some foccacia seasoning, and a bit of sugar to balance the acidity. 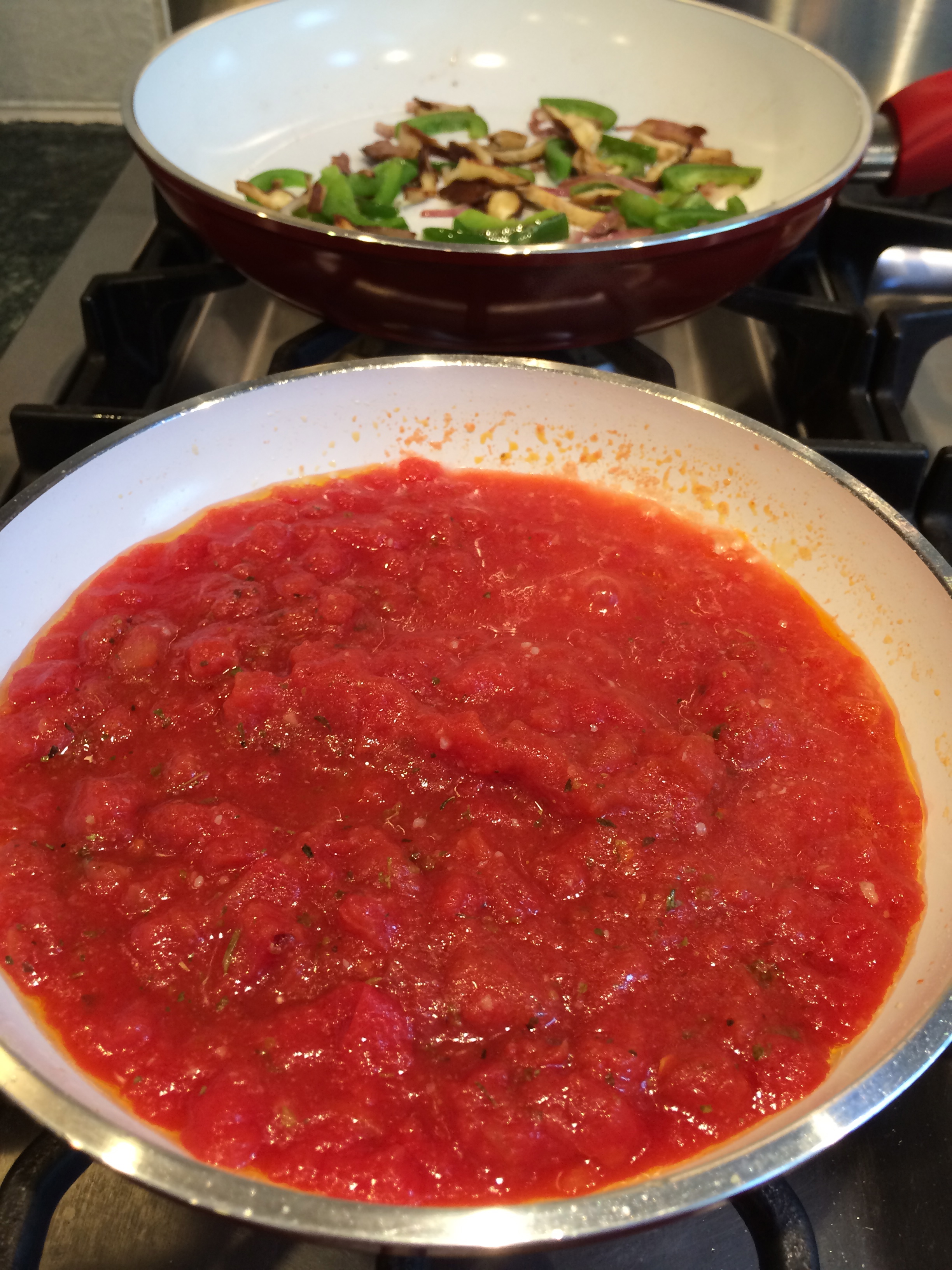 At this point, I believe Caleb got a whiff of the baking cheese and fragrant garlic and decided that if he wanted some of whatever I was making he would have to clean his bowl (finish his breakfast) first. 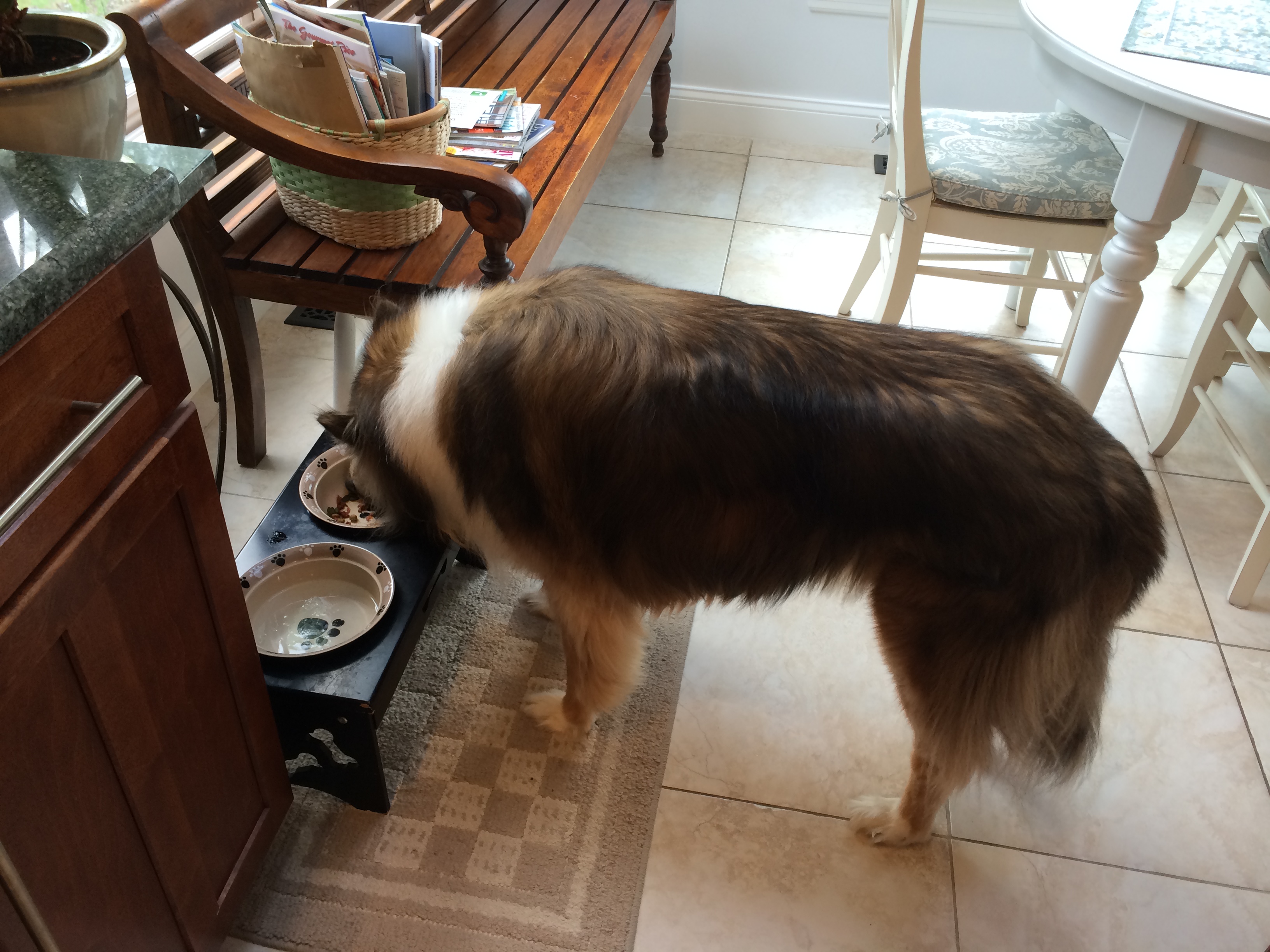 After the crust came out of the oven, I topped it with the sauce, sautéed vegetables, and some slices of fresh mozzarella cheese. 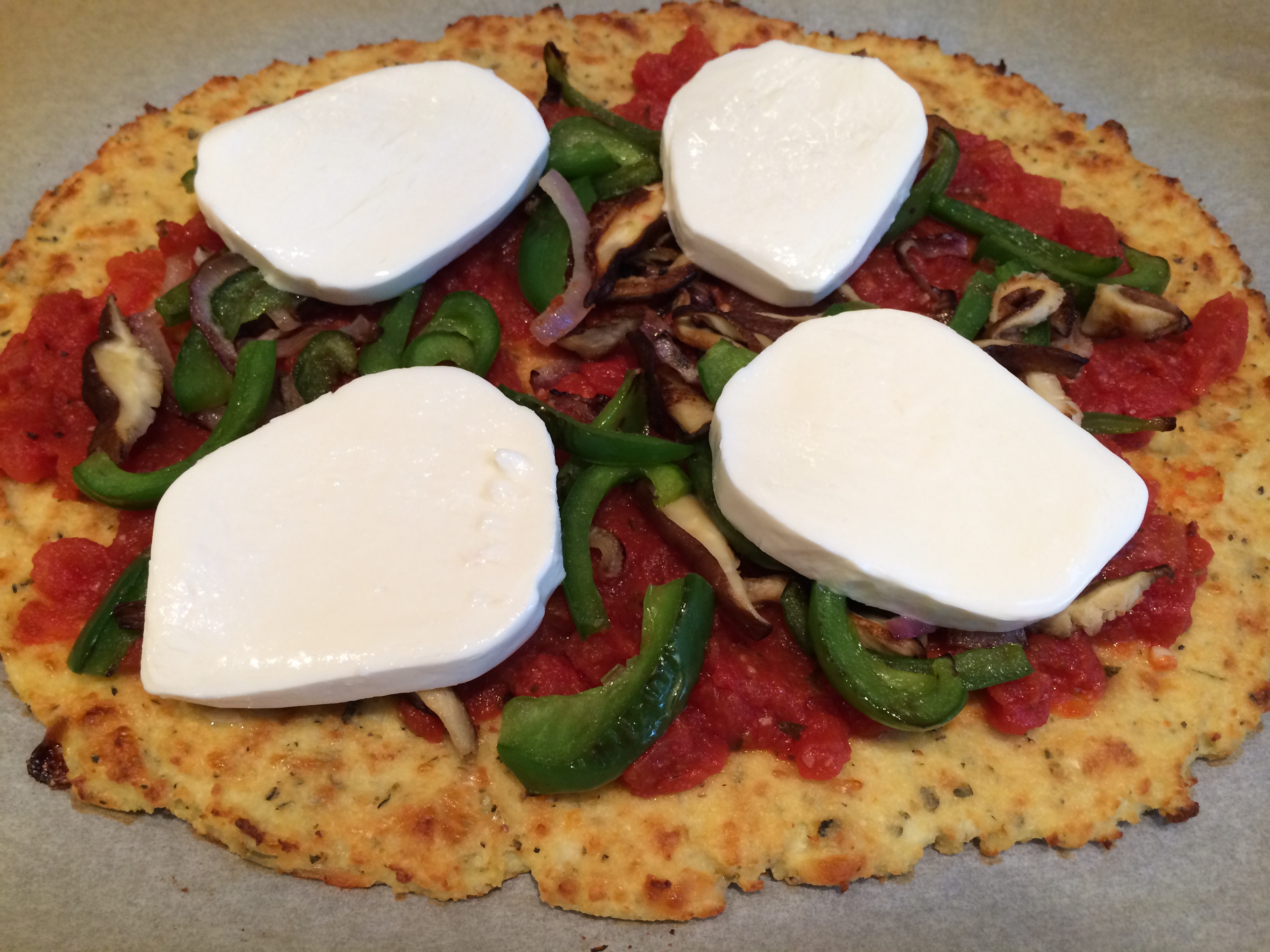 Back into the oven to broil for 3 minutes (next time I think I will broil a bit longer to melt the cheese slightly more).

I sliced some fresh basil from the garden in a chiffonade and sprinkled it on top. 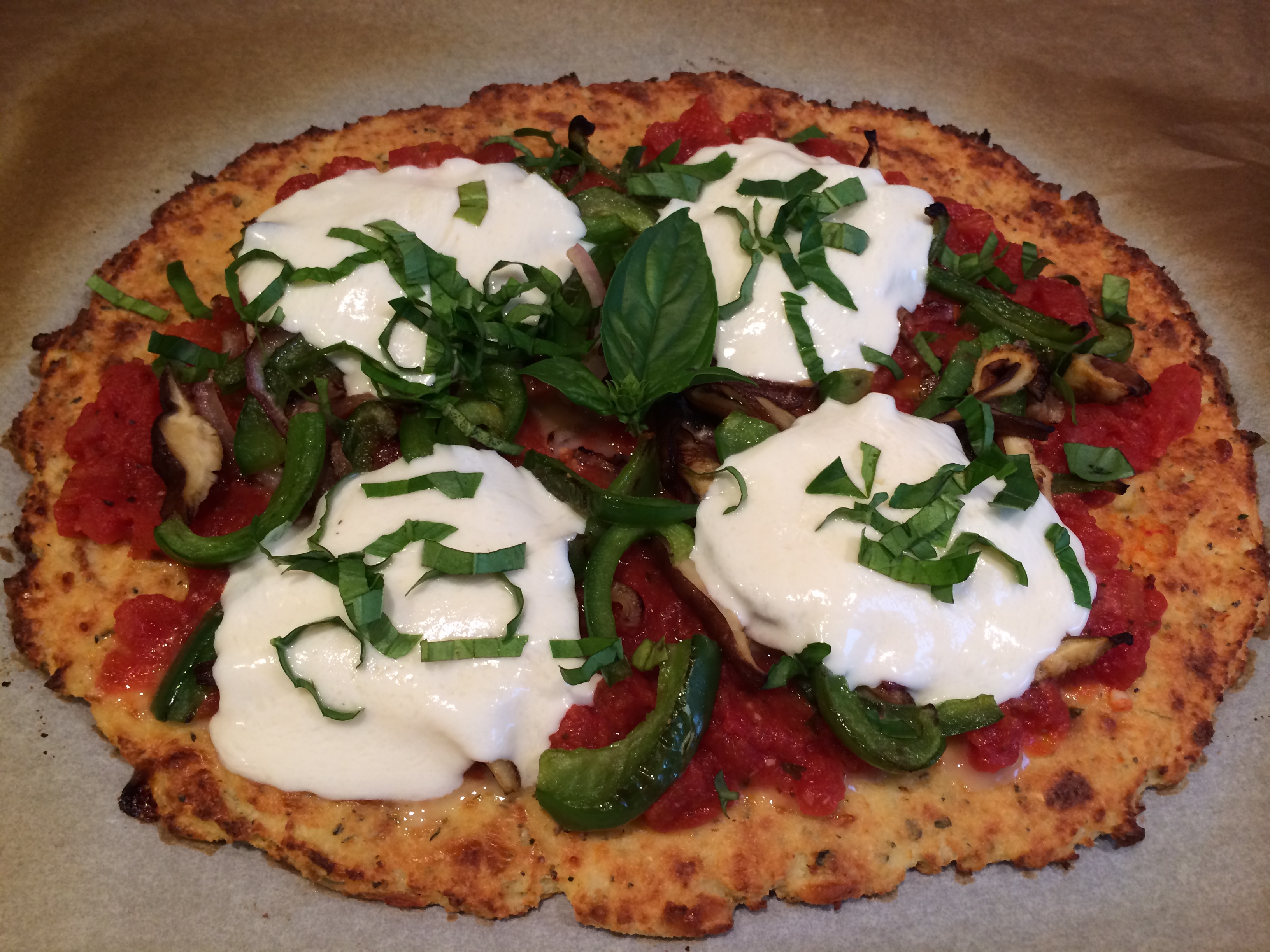 Delicious, filling, full of veggies . . . yummy yummy yummy.  The crust is not the same as a normal doughy crust, but it still has a bready texture.  And it tastes amazing because it’s partly made of cheese! I cut some of the crust and parts with the mozzarella for Caleb, and he was very happy.  I definitely got my pizza fix.