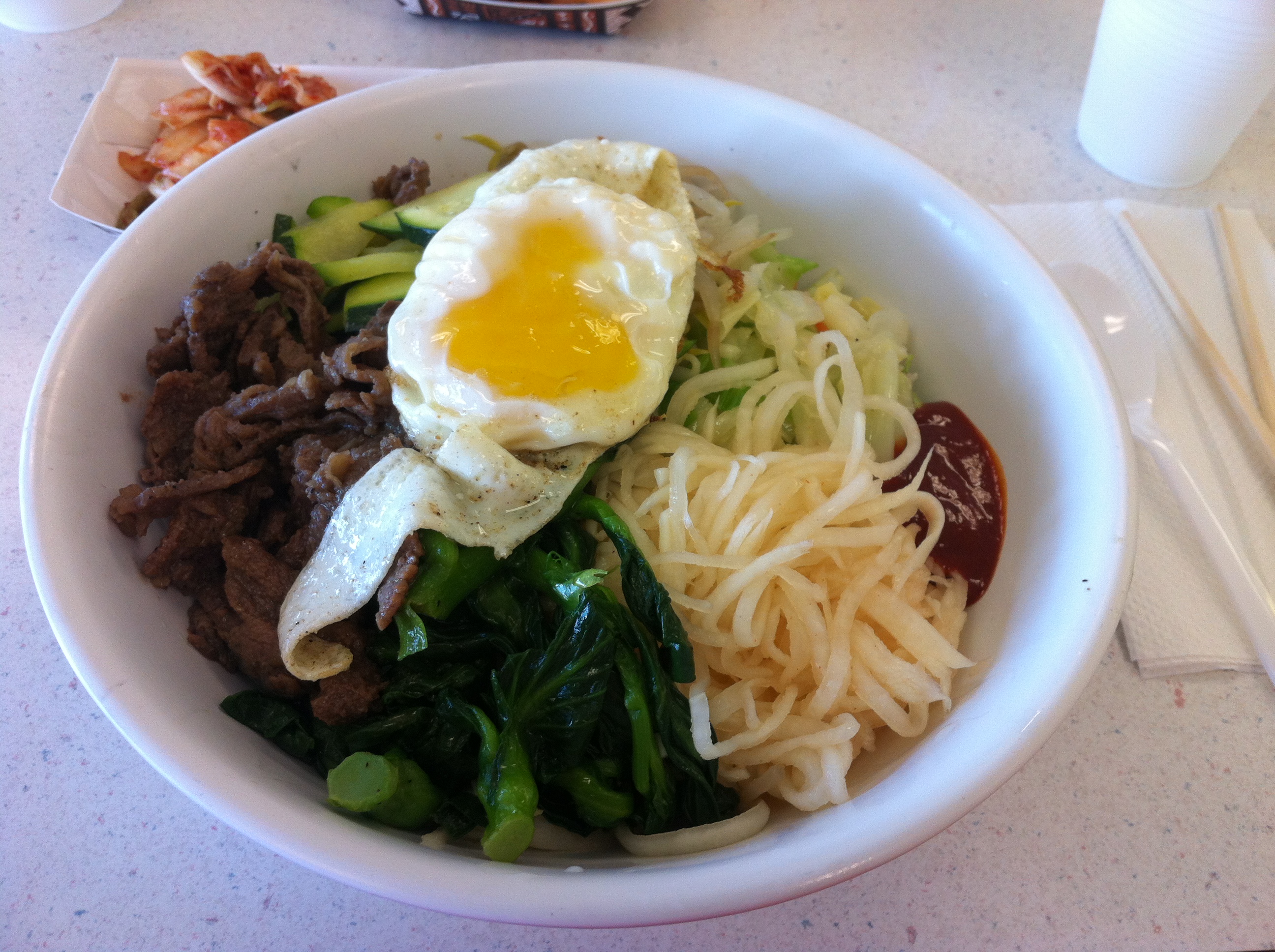 Just as the Japanese influence in Hawaii is evident through the numerous ramen, sushi, and teppanyaki restaurants lining the streets and strip malls, so too does the desire for Korean cuisine seem to have swept the island, as suggested by the equally numerous Korean BBQ joints we have seen so far. For lunch on day 4, the family ventured just far enough from the resort to have lunch at a nearby fast casual type restaurant called Kapolei Korean Barbecue.  While many people tend to primarily associate the heavy use of garlic with Italian cooking, my experience with Korean food has taught me otherwise. It is nearly impossible to walk into any authentically Korean supermarket, restaurant, hair salon, retail store, or even private home without being met by the distinctly potent scent of garlic.

One of our more frequently ordered dishes (as Sara so stunningly displays) is called BiBimBap. Sweet kalbi beef in addition to various vegetables including daikon, cabbage, and chinese broccoli are piled high on a bed of rice. The dish is then completed by adding a dollop of spicy chili paste, and nestling a lightly fried egg among the array of vegetables. Although this combinations of vegetables is a “Hawaiianized” version of traditional BiBimBap, which usually includes more pickled and root vegetables, it nonetheless gained the family’s stamp of approval. 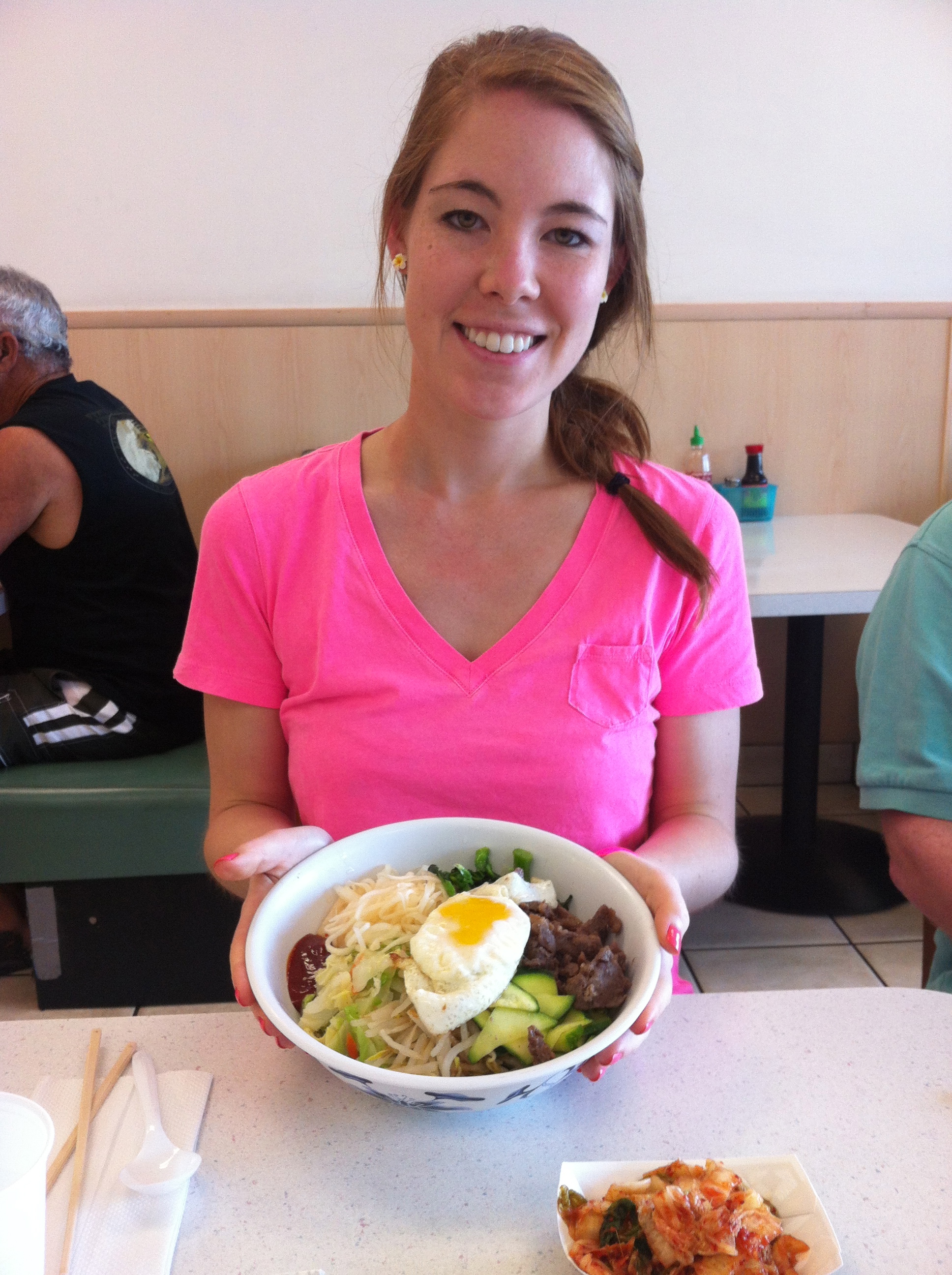 My meal was essentially the noodle version of Sara’s lunch. BiBim Kooksoo also is flavored with the same spicy chili paste as BiBimBap, but the ratio of vegetables to meat is much lower. As you can see, no Korean meal is quite complete without a healthy serving of kimchee on the side. There is a reason our dad likes to call the undeniable aftereffects of eating Korean food “kimchee breath”. The kalbi was probably a little bit sweeter than what I would have preferred, and the noodles could have been much spicier. Even still, I couldn’t seem to put down my chopsticks!

For dinner we invited our family friends to visit the resort and dine with us. The last time we were here, they were the first people to introduce us to our favorite poke, and really introduced us to many different Hawaiian food favorites. This time was no different. For appetizers (or what they like to call pupus) they brought edamame seasoned with sesame oil, garlic, salt, and sesame seeds, and three different kinds of poke. In contrast to the classic sea-salted edamame, the sesame flavored ones seemed a bit heavier and full in flavor. By the time we were finished, the nearly empty bowl you see below was overflowing with the discarded edamame shells. The poke flavors this evening included california roll and variations on traditional ahi. 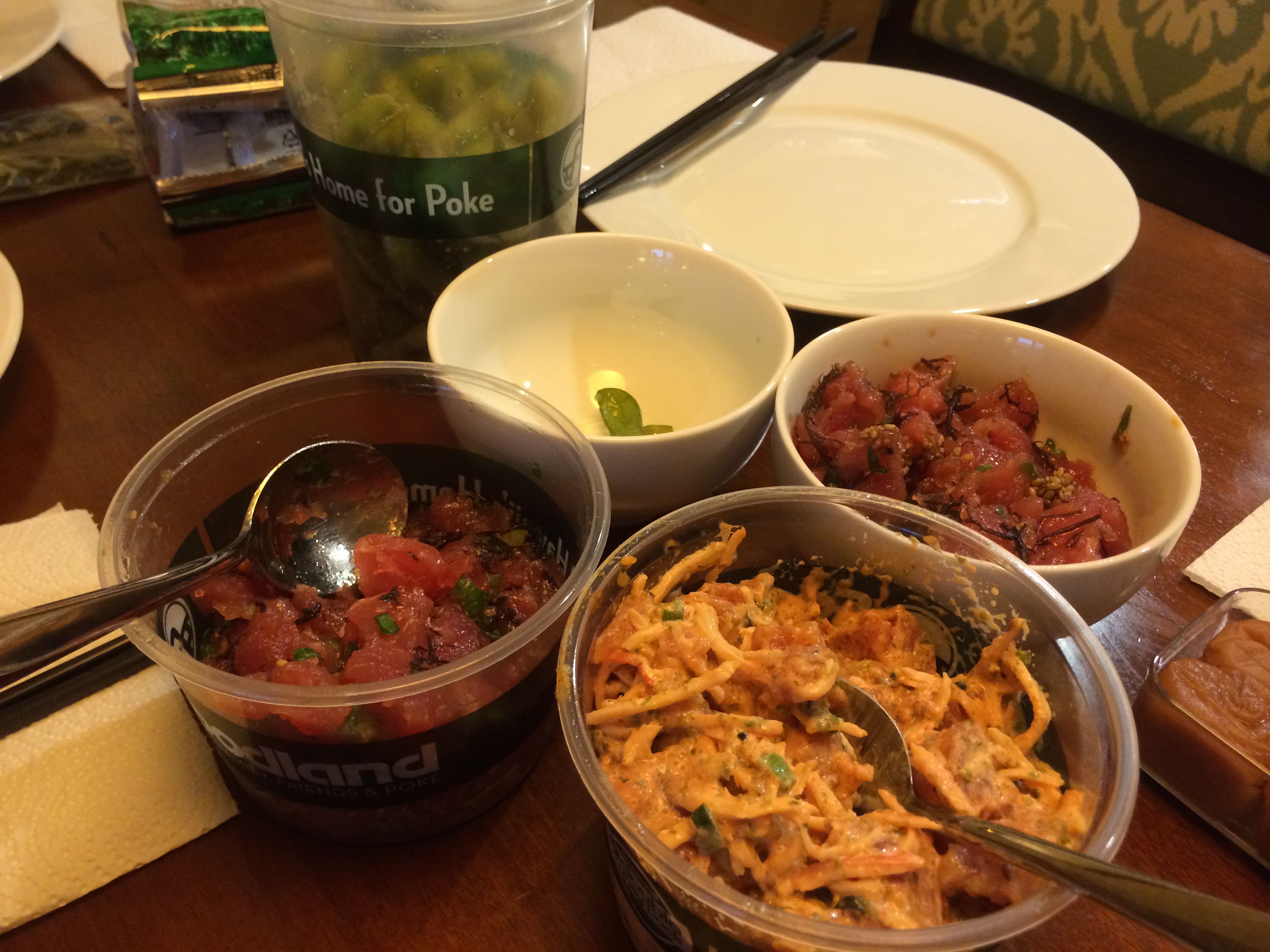 For our main dinner we had salmon with teriyaki glaze accompanied by brown rice, nori and umeboshi we brought from home and then a simple salad and broccoli. Umeboshi is a small pickled plum that is extremely dense and salty in flavor. After separating the flesh of the plum from its pit, small amounts are commonly eaten with rice and nori. Because the salmon was fairly sweet, the salty umeboshi provided a flavorful contrast. 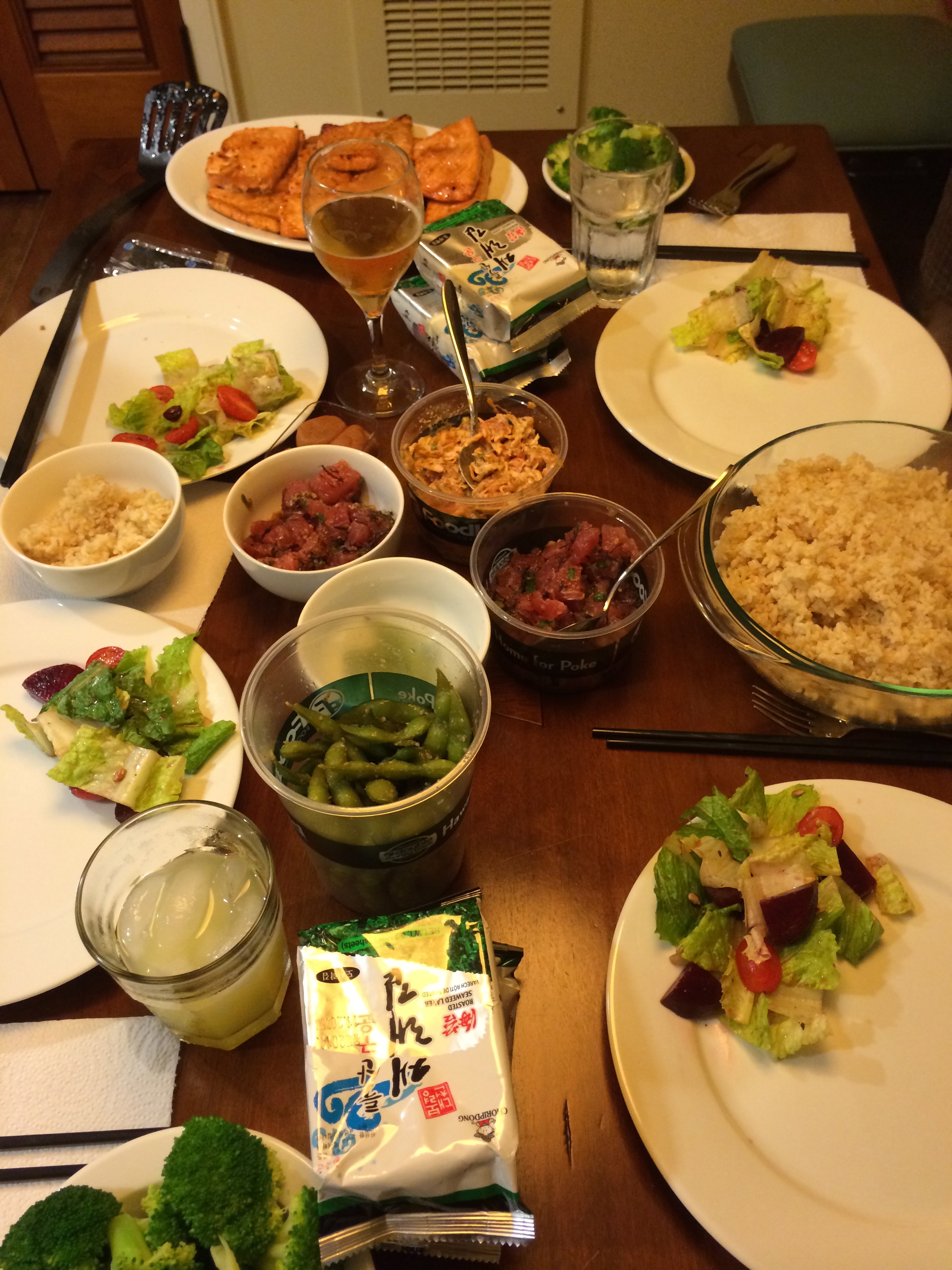 As a finale to the meal, our family friends brought pastries from a local bakery and fresh pineapple straight from the Dole Pineapple field. The pastry was similar to a napoleon in that it was layered and cream filled. What set it apart and kept us stealing extra bites from the box was the intensely flaky texture and smooth cream center which was neither too sweet nor too heavy. Perhaps what made eating them even more enjoyable was to watch the emergence of an extremely satisfied expression on each persons face, and then the consequential sugary white mustache that would appear as evidence.We ate the pineapple as prepared in a local style- tossed in Li Hing powder. In stark contrast to the salty flavor of the umeboshi, the Li Hing powder is made mostly of plum extract and brings out the sweet and tart flavor of the pineapple. While plums may be reserved for mainly baking and dessert ventures in American cooking, the diverse uses of it in Hawaiian and Japanese cooking demonstrates its great versatility. 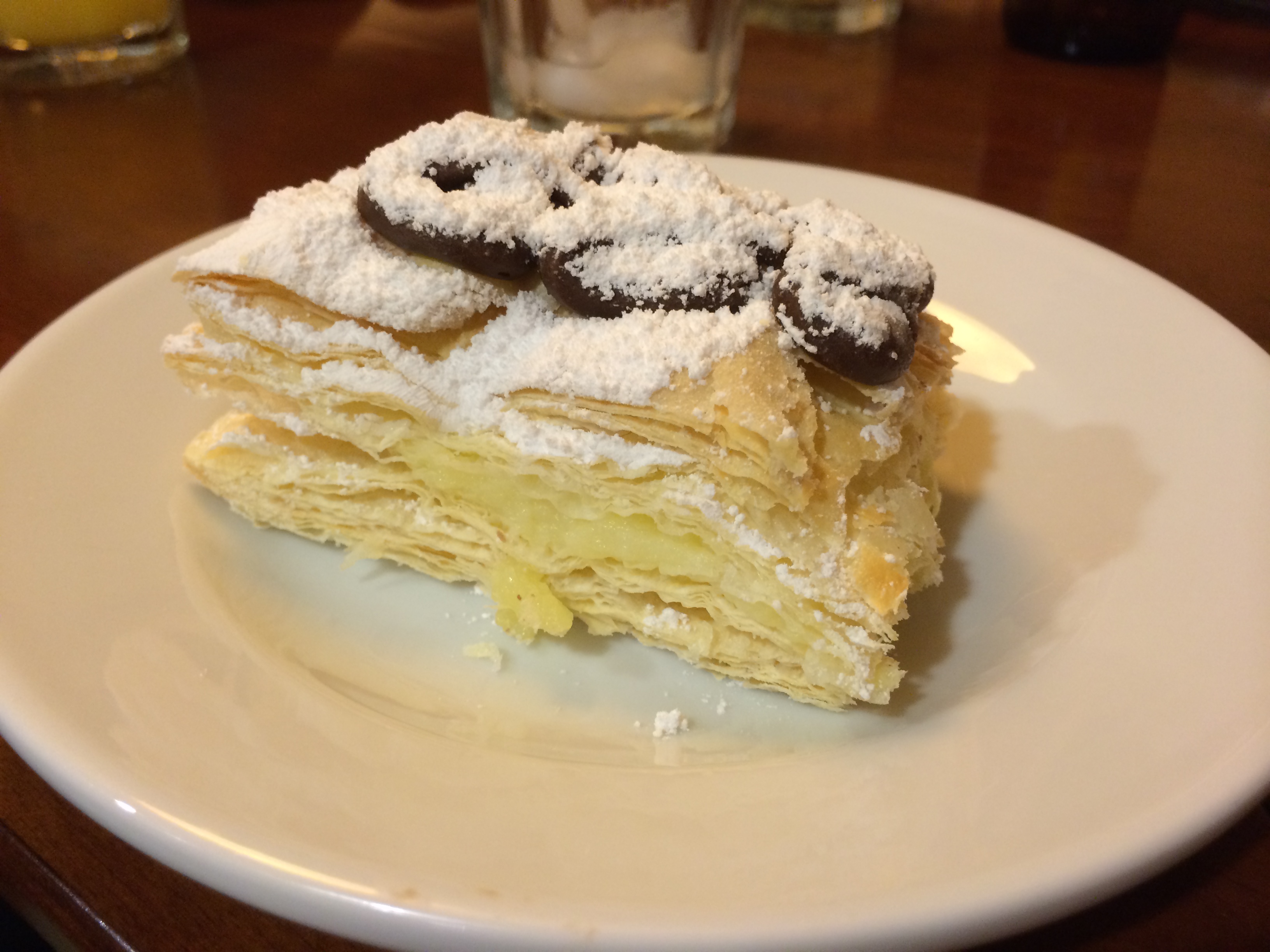 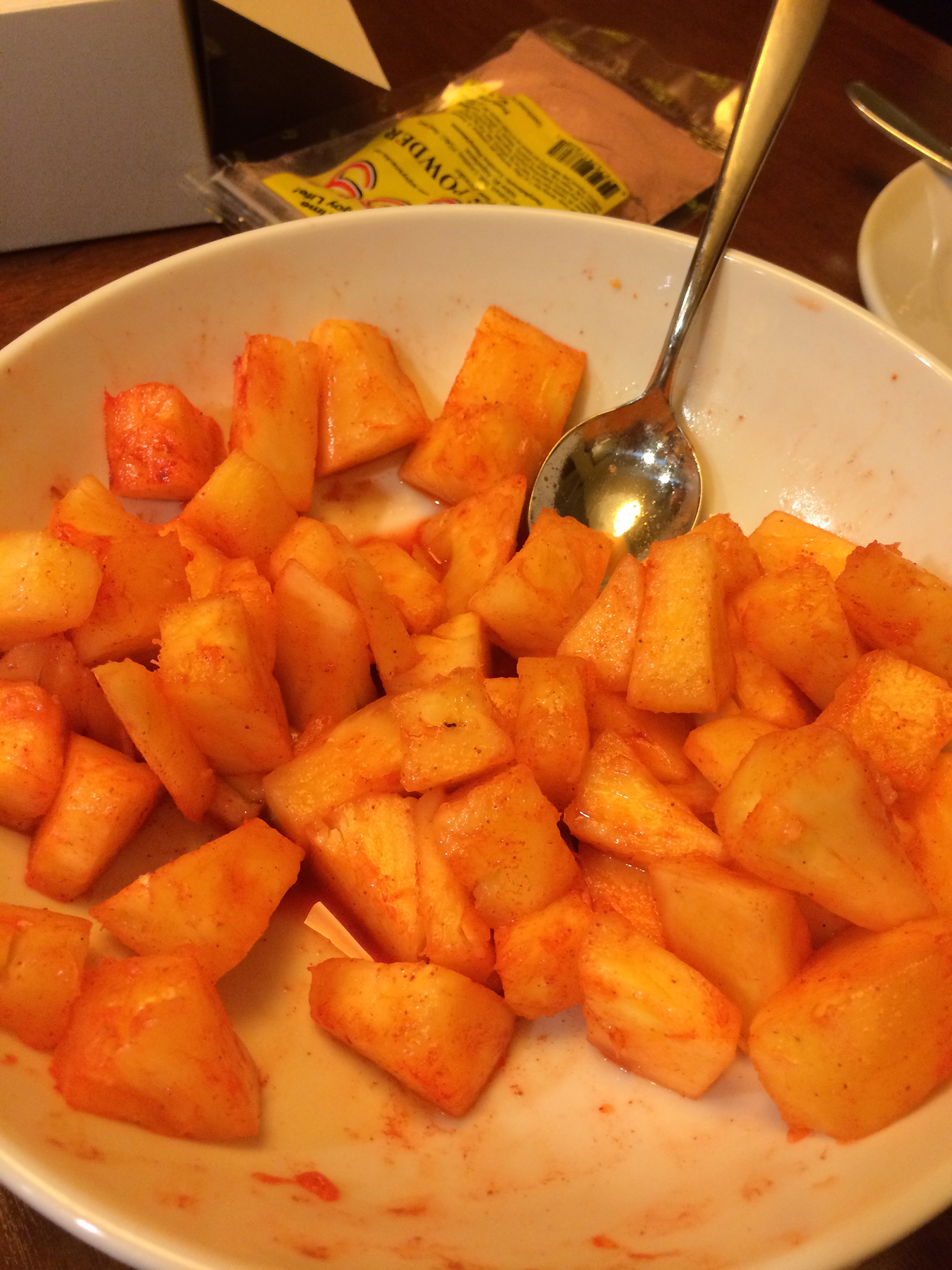