Tuesday is for Traveling.  Today’s Feature: 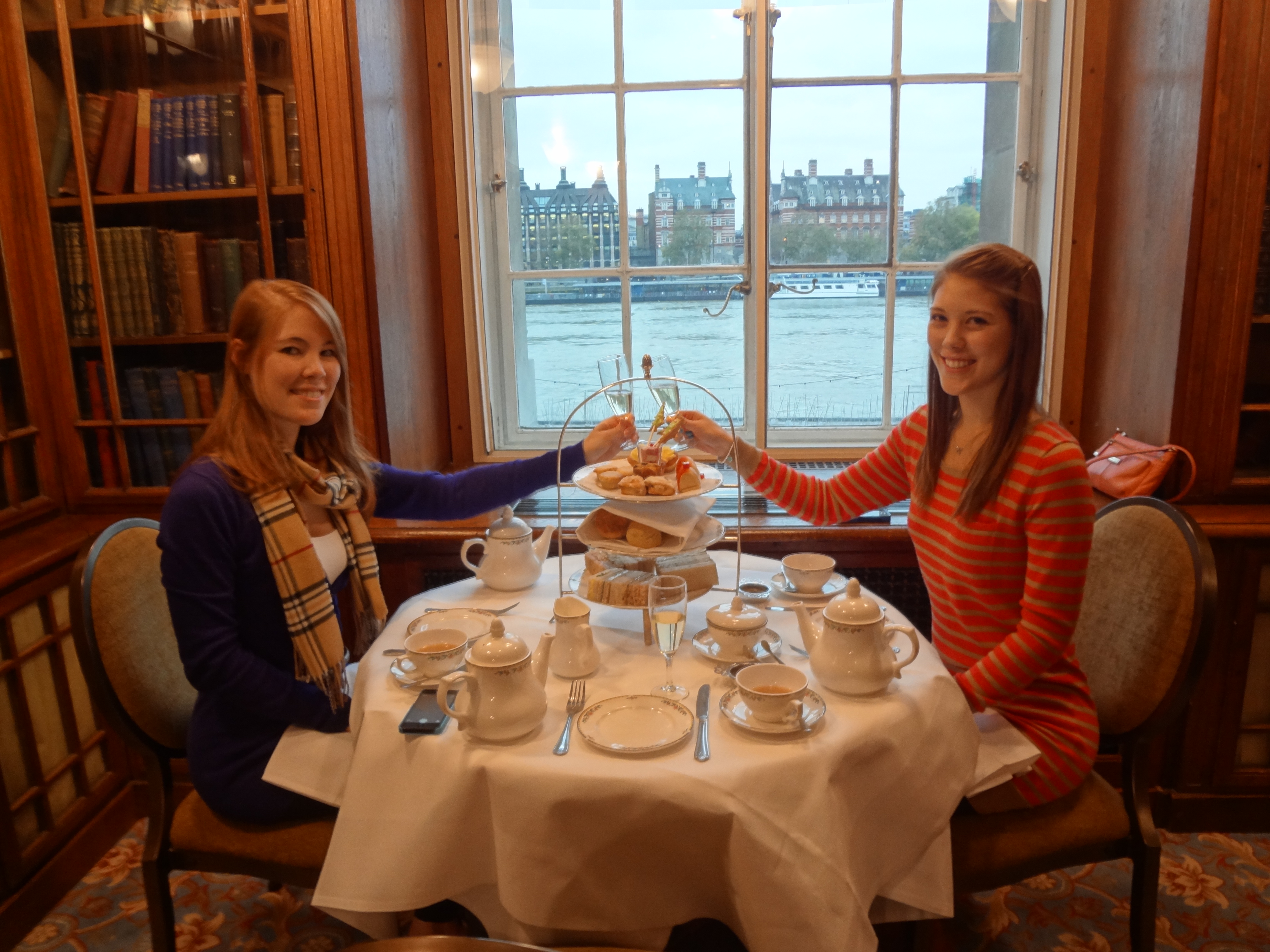 In this picture, Christine and I are enjoying a classic English afternoon tea with our mom with a stunning view of the Thames River.  We could also see Big Ben and the Houses of Parliament from Christine’s seat.  Did I mention I could see the London Eye from my seat?  And we were seated in a small library nook of the larger room serving tea, so we essentially had our own private tea experience.

One of the experiences I was most looking forward to during my year in the UK was having a real afternoon tea.  Surprisingly, this did not happen until my birthday when I had already been living in Scotland for almost 11 months.  I invited some of my friends to join me for a birthday afternoon tea, and we all dressed up and ventured out to the Howard Hotel in Edinburgh.  Generally speaking, 1:00 pm is too early for afternoon tea, but we all knew that we would be served a lot of food and so we figured we would do it as a late lunch. 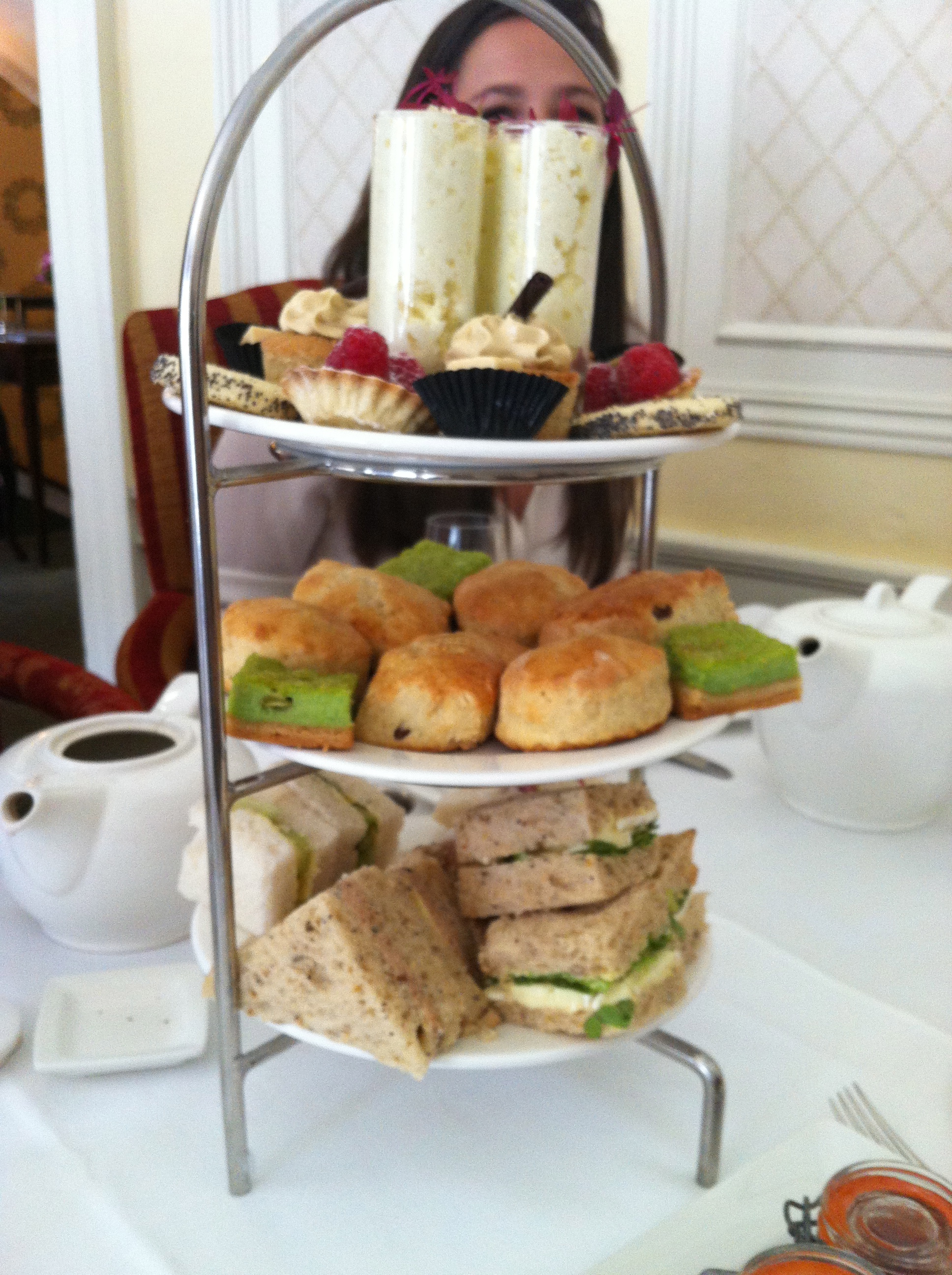 First, as usual, there was endless tea in personal white teapots for each of us.  We received our [insert real name of tiered tray that I can never remember here] overflowing with beautiful bites of deliciousness.  I began with the sandwiches: smoked salmon and chive roulade, honey roast ham and Arran mustard, Mull cheddar and chutney, and egg and cress.  They were cut so delicately, and each bite achieved a perfect balance of simplicity and flavor.  Next I moved up to the middle tier, which featured an asparagus quiche, a plain scone, and a fruit scone for each of us.  The scones were good, not amazing but good, but I would definitely have eaten more of the asparagus quiche.  The crust was buttery and flaky but firm enough to hold up the sweet asparagus mash.  Also the color was just so bright and enticing!

For dessert, there was some sort of fruity citrus mousse, a raspberry tart, a poppy seed cookie, a millionaire shortbread piece (chocolate and caramel layered on shortbread) and a mini cupcake (oops, I can’t remember if it was cappuccino flavored or carrot cake).  The desserts were the stars of this tea in my opinion.  None was too sweet or too heavy, which is key after you’ve eaten all those sandwiches and scones.

My second afternoon tea was at Mimi’s Bakehouse in Leith.  Having finished my final LLM dissertation with a few days to spare, I decided to treat myself to another delicious eating experience.  Two friends and I trekked out to Mimi’s for a tea we had heard was worth trying. 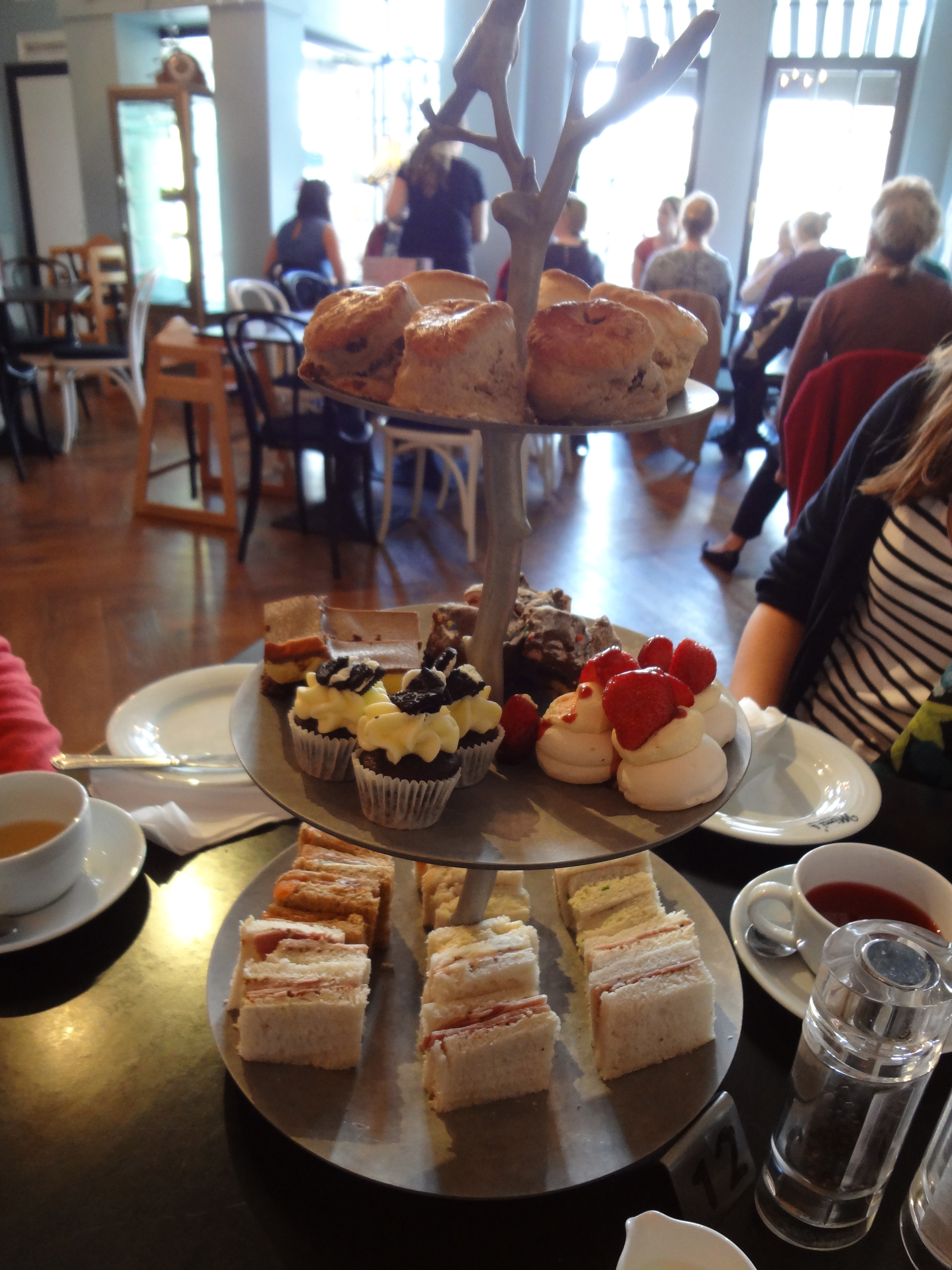 This was a solid afternoon tea experience.  I especially loved the tree branch and bird design of tiered tray that served our treats.  The sandwiches were standard, but still good: free-range egg and chive mayo, honey roast ham with wholegrain mustard mayo, and Scottish oak salmon with cucumber and lemon.  The scones were plain and fruit, served with clotted cream and jam of course.  The desserts are a bit harder to remember, but I remember them all being delicious.  In an effort to walk off our food-babies, we took the long scenic route home instead of the bus.

My third and final afternoon tea in Edinburgh was at the Edinburgh Larder Bistro.  I had only ever been to the Larder Cafe, but as luck would have it I won a Facebook competition for a free afternoon tea for two at the Bistro!  I was so shocked and thrilled because I NEVER win anything like that. 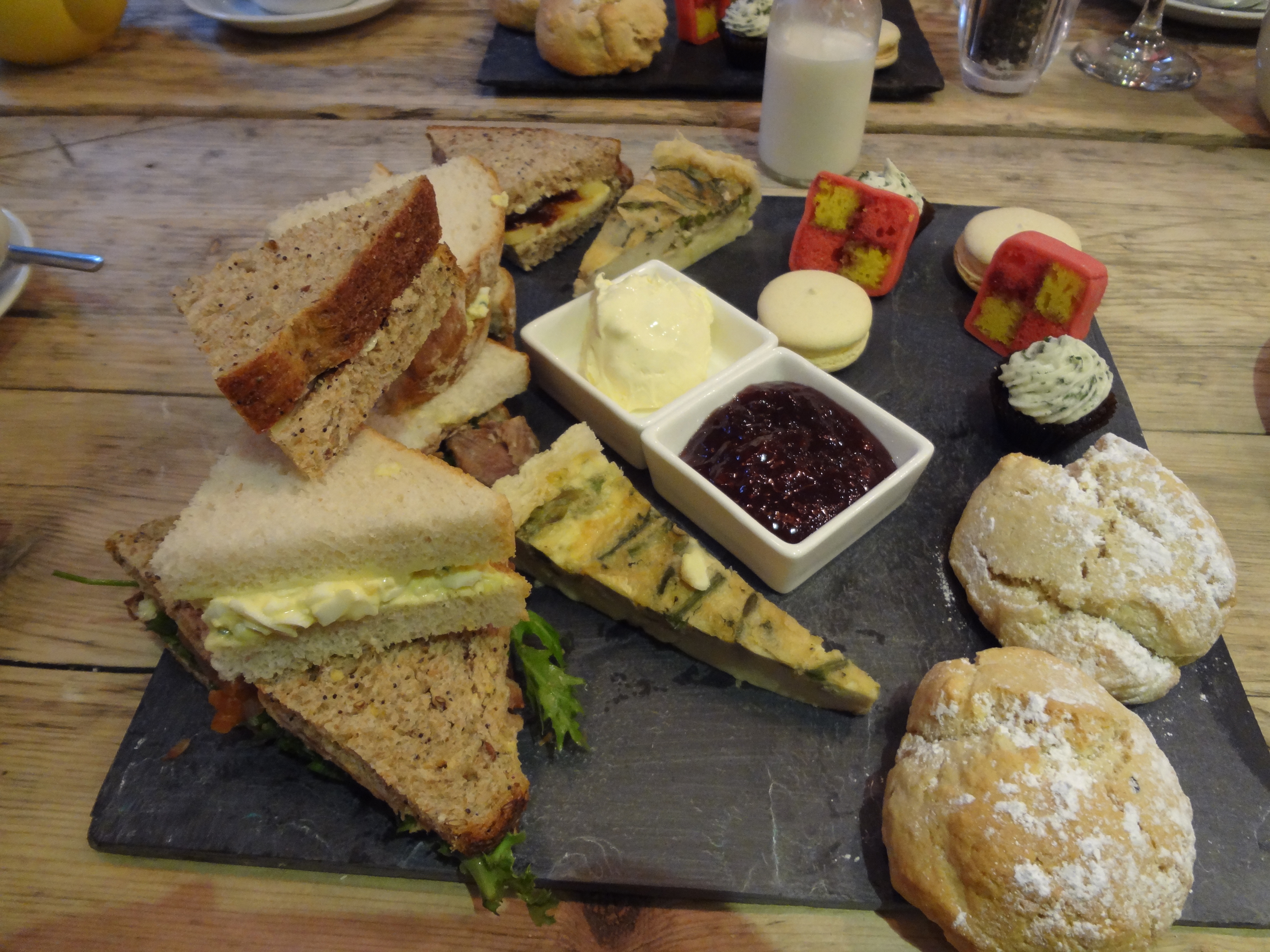 The laid- out display was certainly different and less formal, but it’s nice to change things up.  I especially liked the slate serving stone.  Of course, Larder wins the prize for best scones.  The sandwiches were more rustic than the perfectly trimmed ones I had eaten before, and I may have actually preferred these more.  If I remember correctly, one was egg salad, one was roast beef, one was cheese, and one was smoked salmon.  There was also quiche, which I think was zucchini.  It was okay, but not as good as the asparagus quiche at the Howard.  Dessert was macarons, a mint chocolate cupcake, and some sort of fruity spongecake, which was surprisingly good despite the explosive color.

Now back to that Christmas tea in London . . .

Our mom treated us to a special Mother-Daughter afternoon tea at our hotel, the Marriott County Hall, to celebrate my LLM graduation as well as Christine’s accomplishment of surviving a semester abroad in London. 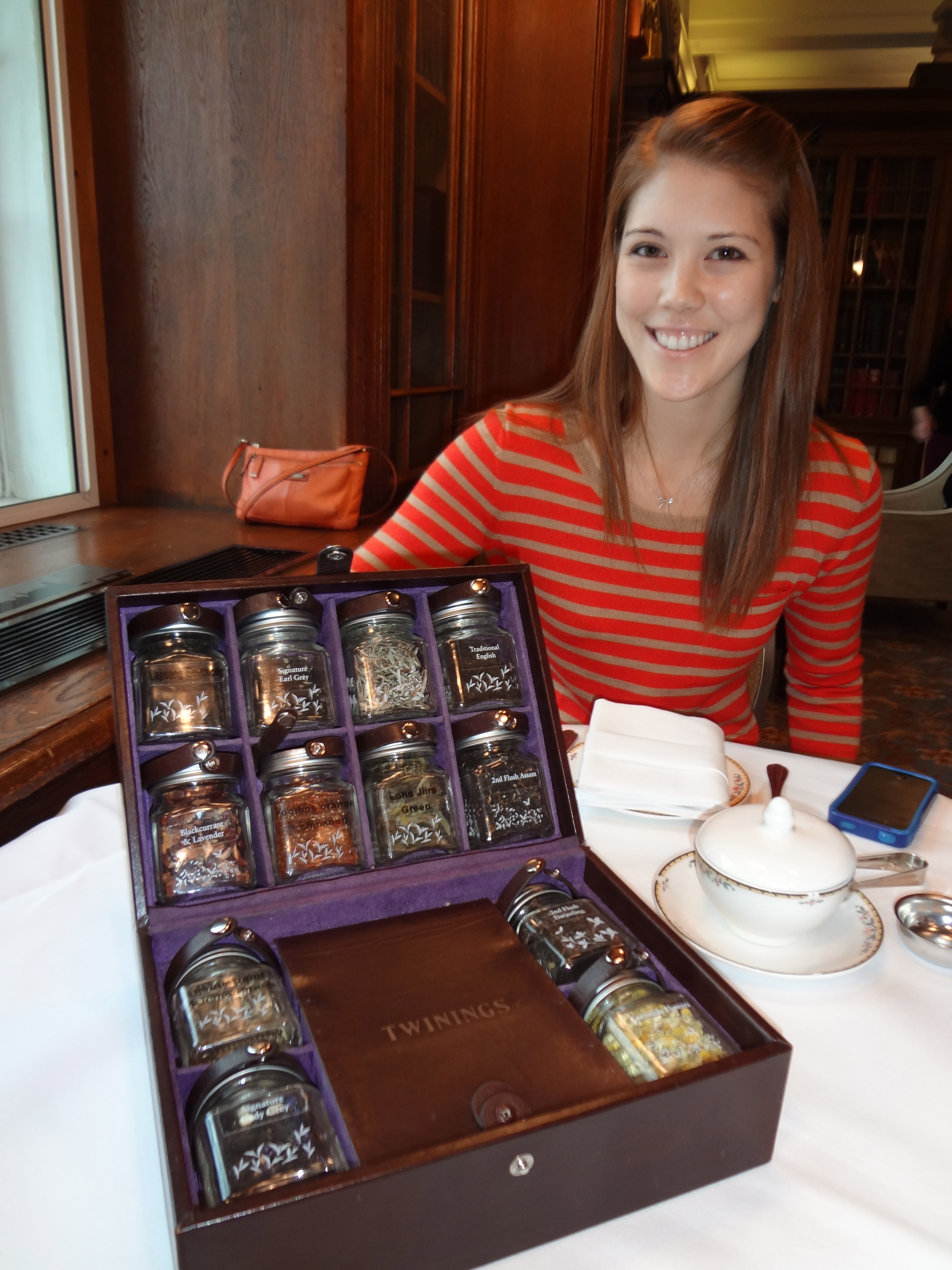 Look at the beautiful Twining’s tea box!  Someday I want to have a nice box for my loose leaf tea. . .I think we spent at least 10 minutes just smelling all the teas and trying to decide which one we wanted.  In the end we all ended up going with Earl Grey, our usual, but I think the loose leaf version of it was so much more flavorful and enjoyable than the standard tea bag.

When I made the reservation for this special Mother-Daughter tea, I decided to go with the Christmas Champagne option.  The holiday themed menu seemed more interesting and special, and a glass of champagne sounded nice.  Little did I know, it was not just ONE glass of champagne that we would receive – oh no, this was a bottomless-glass-constant-refills champagne experience.  Let’s just say this was at least a three-hour long eating experience with multiple bathroom breaks. 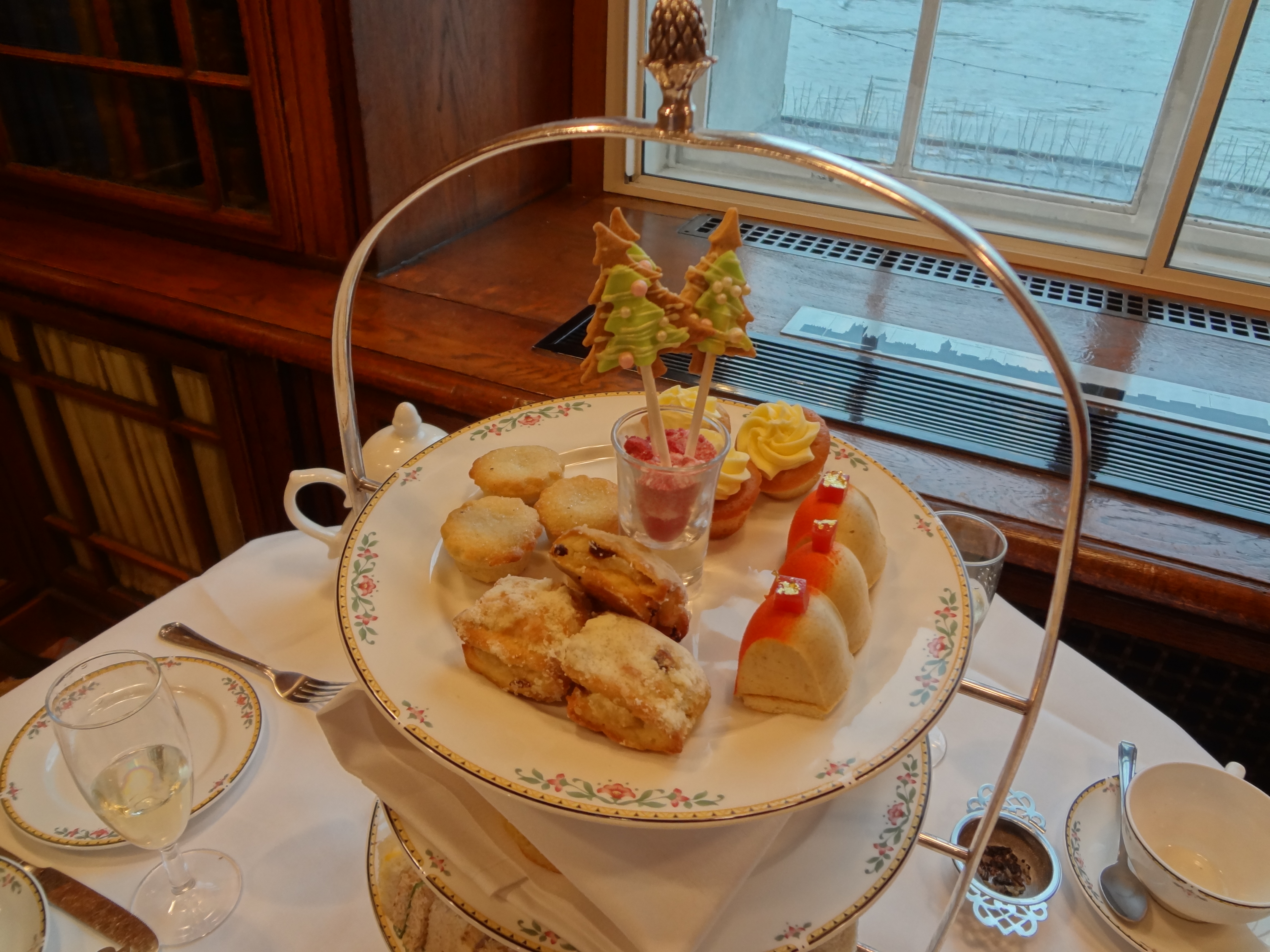 The sandwiches sat on the bottom tier: beef and horseradish, turkey with cranberry chutney, egg and cress, and smoked salmon, and cucumber.  The middle tier held the Christmas themed scones.  Finally, on the top layer the desserts were featured.  There were mince pies, German stollen, Christmas tree cookies, mini cupcakes, and a sort of spongey-mousse cake.  All were amazing.  We could not let anything go to waste, but it seemed like our waiter would never let our champagne glasses even get close to being empty.  It almost became a struggle at the end to finish everything (yes, I know it doesn’t LOOK like a lot of food – BUT IT IS), but we knew this was a once-in-a-lifetime experience with an incredible view that we had to enjoy until the very last crumb.

All these tea experiences inspired me to create an afternoon-tea style menu for my cousin, Sumika’s baby shower last October.  But that is for another day . . .